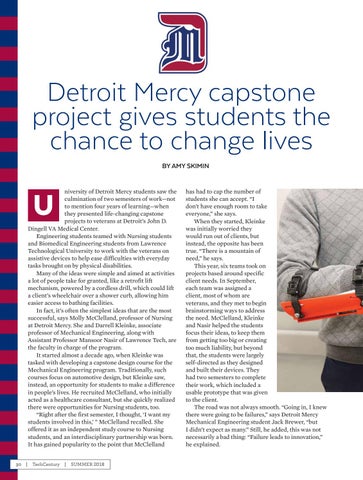 niversity of Detroit Mercy students saw the culmination of two semesters of work—not to mention four years of learning—when they presented life-changing capstone projects to veterans at Detroit’s John D. Dingell VA Medical Center. Engineering students teamed with Nursing students and Biomedical Engineering students from Lawrence Technological University to work with the veterans on assistive devices to help ease difficulties with everyday tasks brought on by physical disabilities. Many of the ideas were simple and aimed at activities a lot of people take for granted, like a retrofit lift mechanism, powered by a cordless drill, which could lift a client’s wheelchair over a shower curb, allowing him easier access to bathing facilities. In fact, it’s often the simplest ideas that are the most successful, says Molly McClelland, professor of Nursing at Detroit Mercy. She and Darrell Kleinke, associate professor of Mechanical Engineering, along with Assistant Professor Mansoor Nasir of Lawrence Tech, are the faculty in charge of the program. It started almost a decade ago, when Kleinke was tasked with developing a capstone design course for the Mechanical Engineering program. Traditionally, such courses focus on automotive design, but Kleinke saw, instead, an opportunity for students to make a difference in people’s lives. He recruited McClelland, who initially acted as a healthcare consultant, but she quickly realized there were opportunities for Nursing students, too. “Right after the first semester, I thought, ‘I want my students involved in this,’ ” McClelland recalled. She offered it as an independent study course to Nursing students, and an interdisciplinary partnership was born. It has gained popularity to the point that McClelland 30 | TechCentury | SUMMER 2018

has had to cap the number of students she can accept. “I don’t have enough room to take everyone,” she says. When they started, Kleinke was initially worried they would run out of clients, but instead, the opposite has been true. “There is a mountain of need,” he says. This year, six teams took on projects based around specific client needs. In September, each team was assigned a client, most of whom are veterans, and they met to begin brainstorming ways to address the need. McClelland, Kleinke and Nasir helped the students focus their ideas, to keep them from getting too big or creating too much liability, but beyond that, the students were largely self-directed as they designed and built their devices. They had two semesters to complete their work, which included a usable prototype that was given to the client. The road was not always smooth. “Going in, I knew there were going to be failures,” says Detroit Mercy Mechanical Engineering student Jack Brewer, “but I didn’t expect as many.” Still, he added, this was not necessarily a bad thing: “Failure leads to innovation,” he explained.

Published by The Engineering Society of Detroit 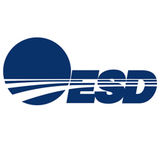 The Engineering Society of Detroit