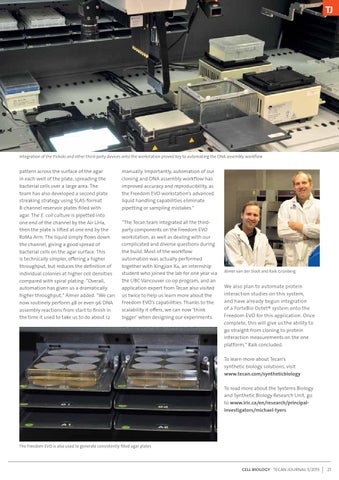 pattern across the surface of the agar

manually. Importantly, automation of our

in each well of the plate, spreading the

cloning and DNA assembly workflow has

bacterial cells over a large area. The

improved accuracy and reproducibility, as

agar. The E. coli culture is pipetted into one end of the channel by the Air LiHa,

“The Tecan team integrated all the third-

then the plate is lifted at one end by the

party components on the Freedom EVO

workstation, as well as dealing with our

the channel, giving a good spread of

complicated and diverse questions during

bacterial cells on the agar surface. This

the build. Most of the workflow

is technically simpler, offering a higher

throughput, but reduces the definition of

together with Xingjian Xu, an internship

student who joined the lab for one year via

the UBC Vancouver co-op program, and an

automation has given us a dramatically

higher throughput,” Almer added. “We can

us twice to help us learn more about the

now routinely perform 48 or even 96 DNA

Freedom EVO’s capabilities. Thanks to the

assembly reactions from start to finish in

scalability it offers, we can now ‘think

the time it used to take us to do about 12

bigger’ when designing our experiments.

We also plan to automate protein interaction studies on this system, and have already begun integration of a ForteBio Octet® system onto the Freedom EVO for this application. Once complete, this will give us the ability to go straight from cloning to protein interaction measurements on the one platform,” Raik concluded. To learn more about Tecan’s synthetic biology solutions, visit www.tecan.com/syntheticbiology To read more about the Systems Biology and Synthetic Biology Research Unit, go to www.iric.ca/en/research/principalinvestigators/michael-tyers 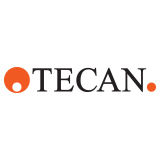 In this issue, we look at the increasing role of automated sample preparation in genomics. As ever-falling sequencing costs mean more and mo...

In this issue, we look at the increasing role of automated sample preparation in genomics. As ever-falling sequencing costs mean more and mo...