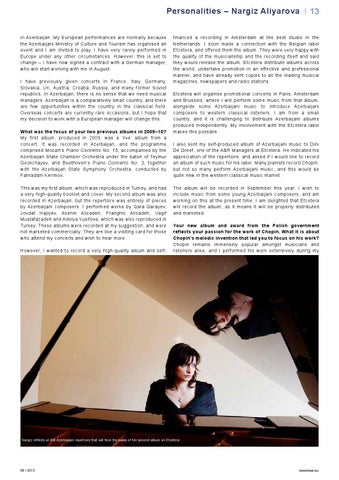 Personalities – Nargiz Aliyarova in Azerbaijan. My European performances are normally because the Azerbaijani Ministry of Culture and Tourism has organised an event and I am invited to play. I have very rarely performed in Europe under any other circumstances. However, this is set to change – I have now signed a contract with a German manager, who will start working with me in August. I have previously given concerts in France, Italy, Germany, Slovakia, UK, Austria, Croatia, Russia, and many former Soviet republics. In Azerbaijan, there is no sense that we need musical managers. Azerbaijan is a comparatively small country, and there are few opportunities within the country in the classical field. Overseas concerts are currently rare occasions, but I hope that my decision to work with a European manager will change this. What was the focus of your two previous albums in 2009–10? My first album, produced in 2009, was a ‘live’ album from a concert. It was recorded in Azerbaijan, and the programme comprised Mozart’s Piano Concerto No. 15, accompanied by the Azerbaijan State Chamber Orchestra under the baton of Teymur Geokchayev, and Beethoven’s Piano Concerto No. 3, together with the Azerbaijan State Symphony Orchestra, conducted by Fahraddin Kerimov. This was my first album, which was reproduced in Turkey, and had a very high-quality booklet and cover. My second album was also recorded in Azerbaijan, but the repertoire was entirely of pieces by Azerbaijani composers. I performed works by Qara Qarayev, Jovdat Hajiyev, Akshin Alizadeh, Franghiz Alizadeh, Vagif Mustafazadeh and Adelya Yusifova, which was also reproduced in Turkey. These albums were recorded at my suggestion, and were not marketed commercially. They are like a visiting card for those who attend my concerts and wish to hear more. However, I wanted to record a very high-quality album and self-

financed a recording in Amsterdam at the best studio in the Netherlands. I soon made a connection with the Belgian label Etcetera, and offered them the album. They were very happy with the quality of the musicianship and the recording itself and said they would release the album. Etcetera distribute albums across the world, undertake promotion in an effective and professional manner, and have already sent copies to all the leading musical magazines, newspapers and radio stations. Etcetera will organise promotional concerts in Paris, Amsterdam and Brussels, where I will perform some music from that album, alongside some Azerbaijani music to introduce Azerbaijani composers to western classical listeners. I am from a small country, and it is challenging to distribute Azerbaijani albums produced independently. My involvement with the Etcetera label makes this possible. I also sent my self-produced album of Azerbaijani music to Dirk De Greef, one of the A&amp;R Managers at Etcetera. He indicated his appreciation of the repertoire, and asked if I would like to record an album of such music for his label. Many pianists record Chopin, but not so many perform Azerbaijani music, and this would be quite new in the western classical music market. The album will be recorded in September this year. I wish to include music from some young Azerbaijani composers, and am working on this at the present time. I am delighted that Etcetera will record the album, as it means it will be properly distributed and marketed. Your new album and award from the Polish government reflects your passion for the work of Chopin. What it is about Chopin’s melodic invention that led you to focus on his work? Chopin remains immensely popular amongst musicians and listeners alike, and I performed his work extensively during my 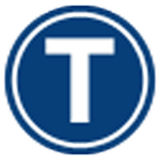