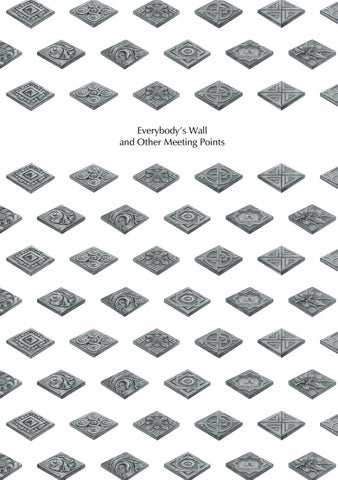 Everybody’s Wall and Other Meeting Points

Everybody’s Wall and Other Meeting Points, brings together a selection of research and work relating to Lydia Meehan’s Wal Pawb 2020 commission with Tŷ Pawb, Wrexham. The commission involved two parts. The first - six individual artworks for two tri-vision billboards within Tŷ Pawb, to be displayed on the external walls of Tŷ Pawb’s gallery, facing into the market hall. The second - an exhibition that was to be held in Tŷ Pawb’s gallery. The latter was interrupted due to the COVID-19 pandemic, and so some of the work has come to exist as this publication. Throughout the commission, the work addressed ideas of the People’s Market and gallery existing within the one building of Tŷ Pawb, by exploring current and historic trades of the local area. Wrexham’s prolific tile and terracotta industry formed much of the visual and conceptual basis for the work. Throughout the late 19th and early 20th Century, there was an extensive and renowned terracotta industry in Wrexham and the surrounding area. This includes Ruabon, from which the clay produced the famous Ruabon red brick, which can be seen in many of the UK’s great Victorian red brick buildings such as the Pierhead, Cardiff and The Victoria Building of The University of Liverpool (hence the term Red Brick Universities). Among the outputs were bricks, finials and cornices, as well as a large range of colourfully decorative tile designs. There is a sense of civic pride in telling tales of local terracotta and tiles being used in significant constructions across the world. Historical architectural catalogues of local terracotta companies, such as Dennis Ruabon and J C Edwards, can be found in Wrexham Museum &amp; Archives. As objects of beauty in themselves, these catalogues showcase the variety of designs made by this local industry. Both the catalogues and products show an interrelationship between functional and artistic output in their designs, as the hand crafted meets the industrial world. One aspect which appears frequently in the catalogues is moulding designs. These mouldings were used as templates for producing architectural details which would have either provided a functional purpose - such as directing

rain fall away from the building - or would have had a purely decorative quality. In the context of the commission, the mouldings became templates of a new kind - considered by the terms wider definitions (model, template, edge, threshold, frame, prototype) as a way of thinking about the physical and conceptual meeting points of collaborative practice - including the positioning of the Wal Pawb artworks which act as a threshold between the market and gallery. Also explored, was the The Art and Treasures Industrial Exhibition of North Wales, held on Hope Street, Wrexham, in 1876. According to the The Cambrian News and Merionethshire Standard, written the day after the exhibitions opening: ‘Rarely beyond the limits of the metropolis has a more valuable or more extensive collection of works of art or mechanical skill and industry been exhibited…’. The vastness of works spanned across medium and included an Industrial Annex - showcasing objects like terracotta bricks, tiles, drapery, architectural drawings, furniture and table covers - of which the Wal Pawb commission took most inspiration and resulted in numerous collaborations, detailed in this book.

What is needed is a framework which is just enough defined so that people naturally tend to stop there; and so that curiosity naturally takes people there, and invites people to stay. A Pattern Language

Make the very structure of the building feel connected to the earth around it. A Pattern Language The Industrial Annex: Architectural Decorative Drawings, Terracotta. Right: Liam Stokes-Massey, A Selection of Studies From a Dennis Ruabon Catalogue, watercolour on paper, 2019.

Above: Medallion commissioned for The Art and Industrial Exhibition of North Wales, 1876, courtesy of Wrexham Museum and Archives.

Previous: Pages from The Art and Treasures Exhibition 1876 catalogue, detailing exhibits of the Industrial Annex, courtesy of Wrexham Museum and Archives. Above: Small tile found in Roath, Cardiff.

Keep the walls half open. Build the wall as a membrane. A wall which is too solid creates hollow echoes. Every wall has social spaces on both sides of it. A Pattern Language Right: The Sustainable Studio, Cardiff, Co-Founded and CoDirected by Julia Harris and Sarah Valentin - collaborators and lead producers on the ‘curtain wall’ artwork. Image credit: Hannah Timm Photography.

Previous: The Mineral Wealth of Wales and its Exploitations, book cover and The Ruabon Brick and Terracotta Company catalogue pages, courtesy of Wrexham Museum and Archives. Right: A collaboration with Owen Friend, an English alphabet based on Wrexham mouldings, 2020.

The Industrial Annex: Furniture design, a design by exhibitor. Above and Right: James Maxwell, Ornamental Stools, designs based on mouldings from a Dennis Ruabon catalogue, 2020.

SCALE 1:20 ELEVATION THE ABOVE ARE ADAPTED FROM STOCK PATTERNS, SPECIAL DESIGNS AND SIZES TO ORDER

Connect the building to the earth around it

Wrexham’s prolific tile and terracotta industry forms the visual and conceptual basis for Lydia Meehan’s publication, titled ‘Everybody’s Wall and Other Meeting Points’, part of the artist's Wal Pawb commission. Considering the process of making walls as one which is both artistic and functional, Lydia highlights the meeting points between art and the everyday. By referring to the Wal Pawb tri-vision boards as thresholds, Lydia uses the architectural detail of the moulding to draw comparison between the decorative brick features of doorways and the coexistence of the art gallery and market at Tŷ Pawb. 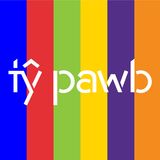