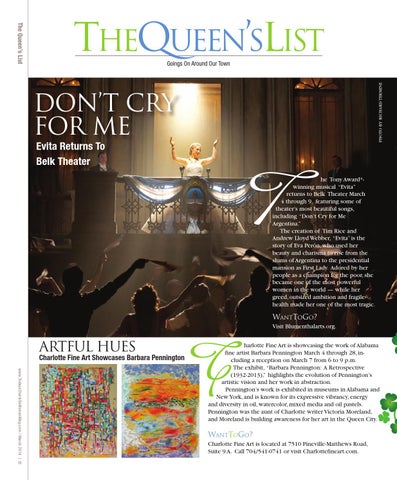 Goings On Around Our Town

THEQUEEN’SLIST Don’t Cry For Me Evita Returns To Belk Theater he Tony Award®winning musical “Evita” returns to Belk Theater March 4 through 9, featuring some of theater’s most beautiful songs, including “Don’t Cry for Me Argentina.” The creation of Tim Rice and Andrew Lloyd Webber, “Evita” is the story of Eva Perón, who used her beauty and charisma to rise from the slums of Argentina to the presidential mansion as First Lady. Adored by her people as a champion for the poor, she became one of the most powerful women in the world — while her greed, outsized ambition and fragile health made her one of the most tragic.

harlotte Fine Art is showcasing the work of Alabama fine artist Barbara Pennington March 4 through 28, including a reception on March 7 from 6 to 9 p.m. The exhibit, “Barbara Pennington: A Retrospective (1932-2013),” highlights the evolution of Pennington’s artistic vision and her work in abstraction. Pennington’s work is exhibited in museums in Alabama and New York, and is known for its expressive vibrancy, energy and diversity in oil, watercolor, mixed media and oil pastels. Pennington was the aunt of Charlotte writer Victoria Moreland, and Moreland is building awareness for her art in the Queen City. 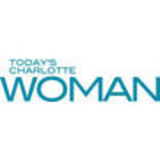