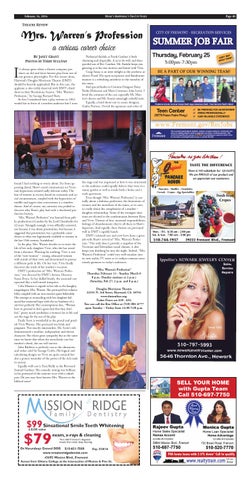 t’s always great when a theatre company produces an old and lesser known play from one of our greatest playwrights. For this reason alone, Hayward’s Douglas Morrisson Theatre (DMT) should be heartily applauded. But in this case, the applause is also richly deserved with DMT’s third show in their Revelations Season, “Mrs. Warren’s Profession,” by George Bernard Shaw. At first I wondered how a play written in 1893 would fair in front of a modern audience but I soon

found I had nothing to worry about. Far from appearing dated, Shaw’s social commentary on Victorian hypocrisies seemed sadly relevant today. The fate of women in society based on economic and social circumstances, coupled with the hypocrisies of middle and upper-class conventions is a timeless theme. And of course, my curiosity was peaked to discover why Shaw’s play had such a checkered production history. “Mrs. Warren’s Profession” was banned from public production in London by the Lord Chamberlin for 32 years. Strangely enough, it was officially censored, not because it was about prostitution, but because it suggested that prostitution was a preferable career choice to what was legitimately available to women in the late 19th century. Scandalous! In the play, Mrs. Warren decides to re-enter the life of her only daughter Vivie, who she has raised from a distance. Wanting for nothing, Vivie is one of the “new women” – young, educated women with minds of their own and determined to pursue a different path in life. On her visit, Vivie finally discovers the truth of her mother’s vocation. DMT’s production of “Mrs. Warren’s Profession,” was directed by DMT’s Artistic Director, Susan Evans. In her skilled hands, the seasoned cast operated like a well-tuned timepiece. Celia Maurice is superb in her role as the haughty, unapologetic Mrs. Warren. She portrayed her vulnerability coupled with an iron exterior quite believably. Her attempt at reconciling with her daughter balanced her maternal hope with the icy hardness of a survivor perfectly. Her contemptuous line, “Women have to pretend to feel a great deal that they don’t feel,” pretty much symbolizes a women’s lot in life and sets the stage for the rest of the play. Emily Scott is wonderful as the proud and prudish Vivie Warren. Her portrayal was brisk and poignant. Not exactly emotionless, Ms. Scott’s role demonstrated a resolute, independent and driven character. She elicits great sympathy but at the same time we know that when she mercilessly cuts her mother’s chord, she too will survive. John Baldwin is perfectly cast as the obnoxious and rather cold Sir George Crofts. His logical and calculating designs on Vivie are quite comical but also a potent reminder of the power of the rich male in society. Equally well-cast is Tom Reilly as the Reverend Samuel Gardner. His comedic timing was brilliant in his portrayal of the anxious vicar with a rakish past. He just may have known Mrs. Warren in the biblical sense!

Nathaniel Andalis as Frank Gardner is both charming and despicable. A ne’er do well, and disrespectful son of Rev. Gardner, Mr. Andalis keeps you guessing as to his true motives and future with Vivie. Craig Souza is an utter delight as the aesthetic architect Praed. His open acceptance and flamboyant manner is a refreshing antithesis to the morality of the times. And special kudos to Costume Designer Daisy Neske-Dickerson and Men’s Costumes, John Lewis. I loved the costumes of the cast, especially Ms. Maurice’s dresses and Mr. Souza’s amazingly colorful suits. Equally, a loud shout-out to scenic designer, Giulio Perrone. I loved the openness and color of

the stage and was impressed at how it was structured so the audience could equally believe they were in a sunny garden as well as inside both a home and a stark apartment. Even though “Mrs. Warren’s Profession” is centrally about a dubious profession, the limitations of women and the moralities of the times, at its core, it’s really about the complexities of a mother – daughter relationship. Some of the strongest emotions are elicited in the confrontation between Kitty and Vivie. Themes of love, maternal responsibilities, feelings of abandonment; they’re all there in Shaw’s depiction. And equally, these themes are portrayed well in DMT’s capable hands. DMT’s talented cast and crew have done a great job with Shaw’s revival of “Mrs. Warren’s Profession.” Not only does it provide a snapshot of the Victorian and Edwardian social climate, it also keeps you thinking far into the night. Indeed, “Mrs. Warren’s Profession” could very well translate into its own reality TV series as it’s subject remains notoriously germane to today’s audiences. “Mrs. Warren’s Profession” Thursday, February 11 - Sunday, March 6 8 p.m. (Sunday matinee at 2 p.m.) (Saturday, Feb 27: 2 p.m. and 8 p.m.) Douglas Morrisson Theatre 22331 N. 3rd Street, Hayward, CA 94541 www.dmtonline.org. Ticket Prices are $10 - $32. You can call the Box Office at (510) 881-6777 open Tuesday – Friday from 12:30-5:30 p.m.