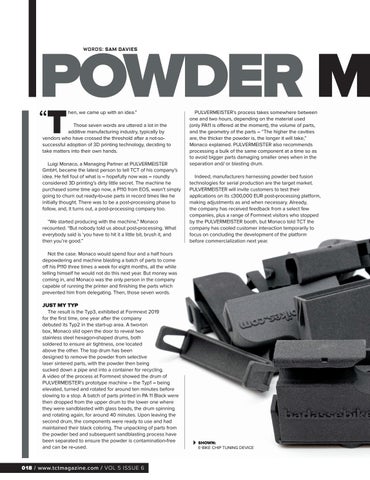 hen, we came up with an idea.”

Those seven words are uttered a lot in the additive manufacturing industry, typically by vendors who have crossed the threshold after a not-sosuccessful adoption of 3D printing technology, deciding to take matters into their own hands. Luigi Monaco, a Managing Partner at PULVERMEISTER GmbH, became the latest person to tell TCT of his company’s idea. He fell foul of what is – hopefully now was – roundly considered 3D printing’s dirty little secret. The machine he purchased some time ago now, a P110 from EOS, wasn’t simply going to churn out ready-to-use parts in record times like he initially thought. There was to be a post-processing phase to follow, and, it turns out, a post-processing company too. “We started producing with the machine,” Monaco recounted. “But nobody told us about post-processing. What everybody said is ‘you have to hit it a little bit, brush it, and then you’re good.”

PULVERMEISTER’s process takes somewhere between one and two hours, depending on the material used (only PA11 is offered at the moment), the volume of parts, and the geometry of the parts – “The higher the cavities are, the thicker the powder is, the longer it will take,” Monaco explained. PULVERMEISTER also recommends processing a bulk of the same component at a time so as to avoid bigger parts damaging smaller ones when in the separation and/ or blasting drum.

Indeed, manufacturers harnessing powder bed fusion technologies for serial production are the target market. PULVERMEISTER will invite customers to test their applications on its ≤300,000 EUR post-processing platform, making adjustments as and when necessary. Already, the company has received feedback from a select few companies, plus a range of Formnext visitors who stopped by the PULVERMEISTER booth, but Monaco told TCT the company has cooled customer interaction temporarily to focus on concluding the development of the platform before commercialization next year.

Not the case. Monaco would spend four and a half hours depowdering and machine blasting a batch of parts to come off his P110 three times a week for eight months, all the while telling himself he would not do this next year. But money was coming in, and Monaco was the only person in the company capable of running the printer and finishing the parts which prevented him from delegating. Then, those seven words.

JUST MY TYP The result is the Typ3, exhibited at Formnext 2019 for the first time, one year after the company debuted its Typ2 in the start-up area. A two-ton box, Monaco slid open the door to reveal two stainless steel hexagon-shaped drums, both soldered to ensure air tightness, one located above the other. The top drum has been designed to remove the powder from selective laser sintered parts, with the powder then being sucked down a pipe and into a container for recycling. A video of the process at Formnext showed the drum of PULVERMEISTER’s prototype machine – the Typ1 – being elevated, turned and rotated for around ten minutes before slowing to a stop. A batch of parts printed in PA 11 Black were then dropped from the upper drum to the lower one where they were sandblasted with glass beads, the drum spinning and rotating again, for around 40 minutes. Upon leaving the second drum, the components were ready to use and had maintained their black coloring. The unpacking of parts from the powder bed and subsequent sandblasting process have been separated to ensure the powder is contamination-free and can be re-used. 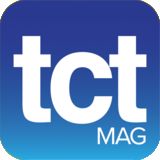