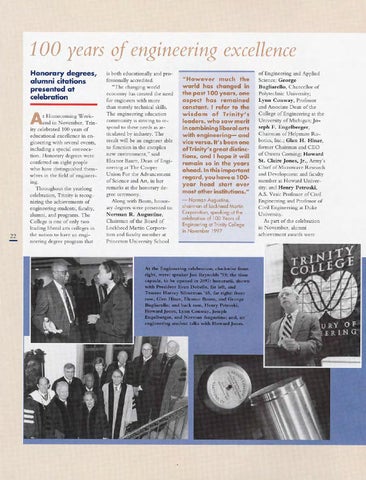 t Homecoming Weekend in November, Trinity celebrated 100 years of educational excellence in engineering with several events, including a special convocation. Honorary degrees were conferred on eight people who have distinguished themselves in the field of engineermg. Throughout the yearlong celebration , Trinity is recognizing the achievements of engineering students, faculty, alumni, and programs. The College is one of only two leading liberal arts colleges in the nation to have an engineering degree program that

of engineering excellence is both educationally and professionally accredited. "The changing world economy has created the need for engineers with more than merely technical skills. The engineering education community is striving to respond to these needs as articulated by industry . The result will be an engineer able to function in the complex new environment," said Eleanor Baum, Dean of Engineering at The Cooper Union For the Advancement of Science and Art, in her remarks at the honorary degree ceremony. Along with Baum, honorary degrees were presented to: Norman R. Augustine, Chairman of the Board of Lockheed Martin Corporation and faculty member at Princeton University School

u However much the world has changed in the past 100 years, one aspect has remained constant. I refer to the wisdom of Tr inity's leaders, who saw merit in combining liberal arts with engineering- and vice versa. It's been one of Trinity's great distinc路 tions, and I hope it will remain so in the years ahead. In this important reg~rd, you have a 100year head start over most other institutions." - Norman Augustine, chairman of Lockheed Martin Corporation, speaking at the celebration of 100 Years of Engineering at Trinity College in November ]997 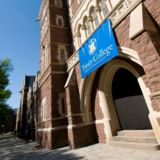