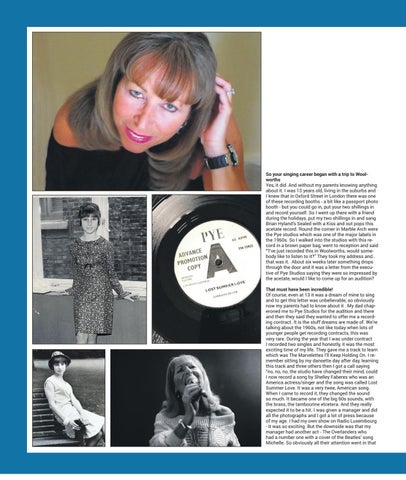 So your singing career began with a trip to Woolworths Yes, it did. And without my parents knowing anything about it. I was 13 years old, living in the suburbs and I knew that in Oxford Street in London there was one of these recording booths - a bit like a passport photo booth - but you could go in, put your two shillings in and record yourself. So I went up there with a friend during the holidays, put my two shillings in and sang Brian Hyland’s Sealed with a Kiss and out pops this acetate record. Round the corner in Marble Arch were the Pye studios which was one of the major labels in the 1960s. So I walked into the studios with this record in a brown paper bag, went to reception and said “’I’ve just recorded this in Woolworths, would somebody like to listen to it?” They took my address and.. that was it. About six weeks later something drops through the door and it was a letter from the executive of Pye Studios saying they were so impressed by the acetate, would I like to come up for an audition? That must have been incredible! Of course, even at 13 it was a dream of mine to sing and to get this letter was unbelievable, so obviously now my parents had to know about it . My dad chaperoned me to Pye Studios for the audition and there and then they said they wanted to offer me a recording contract. It is the stuff dreams are made of. We’re talking about the 1960s, not like today when lots of younger people get recording contracts, this was very rare. During the year that I was under contract I recorded two singles and honestly, it was the most exciting time of my life. They gave me a track to learn which was The Marvelettes I’ll Keep Holding On. I remember sitting by my dansette day after day, learning this track and three others then I got a call saying “no, no, no, the studio have changed their mind, could I now record a song by Shelley Faberes who was an America actress/singer and the song was called Lost Summer Love. It was a very twee, American song. When I came to record it, they changed the sound so much. It became one of the big 60s sounds, with the brass, the tambourine etcetera. And they really expected it to be a hit. I was given a manager and did all the photographs and I got a lot of press because of my age. I had my own show on Radio Luxembourg - it was so exciting. But the downside was that my manager had another act - The Overlanders who had a number one with a cover of the Beatles’ song Michelle. So obviously all their attention went in that