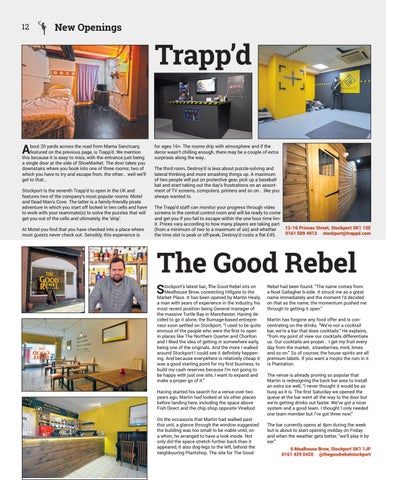 bout 20 yards across the road from Mama Sanctuary, featured on the previous page, is Trapp’d. We mention this because it is easy to miss, with the entrance just being a single door at the side of ShoeMarket. The door takes you downstairs where you book into one of three rooms; two of which you have to try and escape from, the other... well we’ll get to that... Stockport is the seventh Trapp’d to open in the UK and features two of the company’s most popular rooms: Motel and Dead Man’s Cove. The latter is a family-friendly pirate adventure in which you start off locked in two cells and have to work with your teammate(s) to solve the puzzles that will get you out of the cells and ultimately, the ‘ship’. At Motel you find that you have checked into a place where most guests never check out. Sensibly, this experience is

for ages 16+. The rooms drip with atmosphere and if the decor wasn’t chilling enough, there may be a couple of extra surprises along the way... The third room, Destroy’d is less about puzzle-solving and lateral thinking and more smashing things up. A maximum of two people will put on protective gear, pick up a baseball bat and start taking out the day’s frustrations on an assortment of TV screens, computers, printers and so on... like you always wanted to. The Trapp’d staff can monitor your progress through video screens in the central control room and will be ready to come and get you if you fail to escape within the one hour time limit. Prices vary according to how many players are taking part 12-16 Princes Street, Stockport SK1 1SE (from a minimum of two to a maximum of six) and whether 0161 509 4913 stockport@trappd.com the time slot is peak or off-peak, Destroy’d costs a flat £45.

tockport’s latest bar, The Good Rebel sits on Mealhouse Brow, connecting Hillgate to the Market Place. It has been opened by Martin Healy, a man with years of experience in the industry, his most recent position being General manager of the massive Turtle Bay in Manchester. Having decided to go it alone, the Burnage-based entrepreneur soon settled on Stockport, “I used to be quite envious of the people who were the first to open in places like The Northern Quarter and Chorlton and I liked the idea of getting in somewhere early, being one of the originals. And the more I walked around Stockport I could see it definitely happening. And because everywhere is relatively cheap it was a good starting point for my first business, to build my cash reserves because I’m not going to be happy with just one site, I want to expand and make a proper go of it.” Having started his search for a venue over two years ago, Martin had looked at six other places before landing here, including the space above Fish Direct and the chip shop opposite Vinebod. On the occasions that Martin had walked past this unit, a glance through the window suggested the building was too small to be viable until, on a whim, he arranged to have a look inside. Not only did the space stretch further back than it appeared, it also dog-legs to the left, behind the neighbouring Plantshop. The site for The Good

Rebel had been found. “The name comes from a Noel Gallagher b-side. It struck me as a great name immediately and the moment I’d decided on that as the name, the momentum pushed me through to getting it open.” Martin has forgone any food offer and is concentrating on the drinks. “We’re not a cocktail bar, we’re a bar that does cocktails.” He explains, “from my point of view our cocktails differentiate us. Our cocktails are proper... I get my fruit every day from the market, strawberries, mint, limes and so on.” So of courser, the house spirits are all premium labels. If you want a mojito the rum in it is Plantation. The venue is already proving so popular that Martin is redesigning the back bar area to install an extra ice well, “I never thought it would be as busy as it is. The first Saturday we opened the queue at the bar went all the way to the door but we’re getting drinks out faster. We’ve got a nicer system and a good team. I thought I only needed one team member but I’ve got three now.” The bar currently opens at 4pm during the week but is about to start opening midday on Friday and when the weather gets better, “we’ll play it by ear.” 6 Mealhouse Brow, Stockport SK1 1JP 0161 429 0420 @thegoodrebelstockport