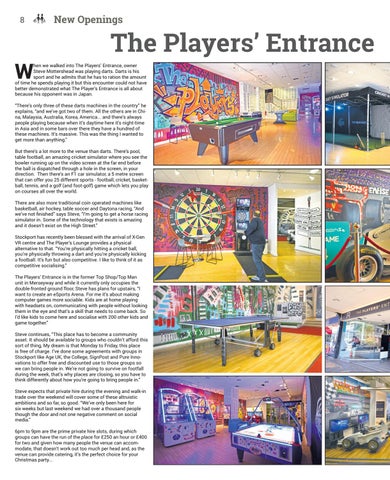 hen we walked into The Players’ Entrance, owner Steve Mottershead was playing darts. Darts is his sport and he admits that he has to ration the amount of time he spends playing it but this encounter could not have better demonstrated what The Player’s Entrance is all about because his opponent was in Japan. “There’s only three of these darts machines in the country” he explains, “and we’ve got two of them. All the others are in China, Malaysia, Australia, Korea, America... and there’s always people playing because when it’s daytime here it’s night-time in Asia and in some bars over there they have a hundred of these machines. It’s massive. This was the thing I wanted to get more than anything.” But there’s a lot more to the venue than darts. There’s pool, table football, an amazing cricket simulator where you see the bowler running up on the video screen at the far end before the ball is dispatched through a hole in the screen, in your direction. Then there’s an F1 car simulator, a 5 metre screen that can offer you 25 different sports - football, cricket, basketball, tennis, and a golf (and foot-golf) game which lets you play on courses all over the world. There are also more traditional coin operated machines like basketball, air hockey, table soccer and Daytona racing, “And we’ve not finished” says Steve, “I‘m going to get a horse racing simulator in. Some of the technology that exists is amazing and it doesn’t exist on the High Street.” Stockport has recently been blessed with the arrival of X-Gen VR centre and The Player’s Lounge provides a physical alternative to that. “You’re physically hitting a cricket ball, you’re physically throwing a dart and you’re physically kicking a football. It’s fun but also competitive. I like to think of it as competitive socialising.” The Players’ Entrance is in the former Top Shop/Top Man unit in Merseyway and while it currently only occupies the double-fronted ground floor, Steve has plans for upstairs, “I want to create an eSports Arena. For me it’s about making computer games more sociable. Kids are at home playing with headsets on, communicating with people without looking them in the eye and that’s a skill that needs to come back. So I’d like kids to come here and socialise with 200 other kids and game together.” Steve continues, “This place has to become a community asset. It should be available to groups who couldn’t afford this sort of thing, My dream is that Monday to Friday, this place is free of charge. I’ve done some agreements with groups in Stockport like Age UK, the College, SignPost and Pure Innovations to offer free and discounted use to those groups so we can bring people in. We’re not going to survive on footfall during the week, that’s why places are closing, so you have to think differently about how you’re going to bring people in.” Steve expects that private hire during the evening and walk-in trade over the weekend will cover some of these altruistic ambitions and so far, so good. “We’ve only been here for six weeks but last weekend we had over a thousand people though the door and not one negative comment on social media.” 6pm to 9pm are the prime private hire slots, during which groups can have the run of the place for £250 an hour or £400 for two and given how many people the venue can accommodate, that doesn’t work out too much per head and, as the venue can provide catering, it’s the perfect choice for your Christmas party...