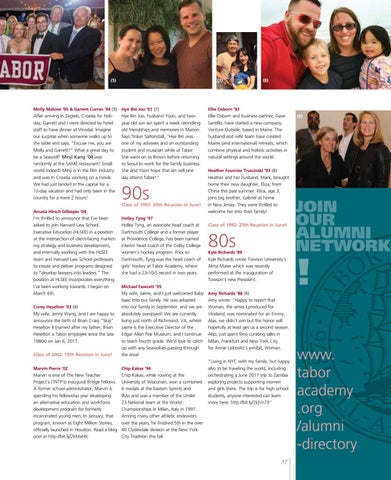 After arriving in Zagreb, Croatia for holiday, Garrett and I were directed by hotel staff to have dinner at Vinodal. Imagine our surprise when someone walks up to the table and says, “Excuse me, you are Molly and Garrett?” What a great day to be a Seawolf! Minji Kang ’04 was randomly at the SAME restaurant! Small world indeed! Minji is in the film industry and was in Croatia working on a movie. We had just landed in the capital for a 12-day vacation and had only been in the country for a mere 2 hours!

Hye Bin Joo, husband Yoon, and twoyear old son Ian spent a week rekindling old friendships and memories in Marion. Says Tinker Saltonstall, “Hye Bin was one of my advisees and an outstanding student and musician while at Tabor. She went on to Brown before returning to Seoul to work for the family business. She and Yoon hope that Ian will one day attend Tabor!”

Ellie Osborn and business partner, Dave Santillo, have started a new company, Venture Outside, based in Maine. The husband and wife team have created Maine (and international) retreats, which combine physical and holistic activities in natural settings around the world.

I’m thrilled to announce that I’ve been asked to join Harvard Law School Executive Education (HLSEE) in a position at the intersection of client-facing marketing strategy and business development, and internally working with the HLSEE team and Harvard Law School professors to create and deliver programs designed to “develop lawyers into leaders.” The position at HLSEE incorporates everything I’ve been working towards. I began on March 6th. Corey Heselton ’03 (6)

Heather and her husband, Mark, brought home their new daughter, Eliza, from China this past summer. Eliza, age 3, joins big brother, Gabriel at home in New Jersey. They were thrilled to welcome her into their family!

Holley Tyng, an associate head coach at Dartmouth College and a former player at Providence College, has been named interim head coach of the Colby College women’s hockey program. Prior to Dartmouth, Tyng was the head coach of girls’ hockey at Tabor Academy, where she had a 23-10-5 record in two years.

My wife, Jaime, and I just welcomed Baby Isaac into our family. He was adopted into our family in September, and we are absolutely overjoyed! We are currently living just north of Richmond, VA, where Jaime is the Executive Director of the Edgar Allan Poe Museum, and I continue to teach fourth grade. We’d love to catch up with any Seawolves passing through the area!

Chip Kakas, while rowing at the University of Wisconsin, won a combined 6 medals at the Eastern Sprints and IRAs and was a member of the Under 23 National team at the World Championships in Milan, Italy in 1997. Among many other athletic endeavors over the years, he finished 5th in the over 40 Clydesdale division at the New York City Triathlon this fall.

Amy wrote: “Happy to report that Woman, the series I produced for Viceland, was nominated for an Emmy. Alas, we didn’t win but the honor will hopefully at least get us a second season. Also, just spent time curating talks in Milan, Frankfurt and New York City for Annie Leibovitz’s exhibit, Woman. “Living in NYC with my family, but happy also to be traveling the world, including orchestrating a June 2017 trip to Zambia exploring projects supporting women and girls there. The trip is for high school students, anyone interested can learn more here: http://bit.ly/2kjVn79” 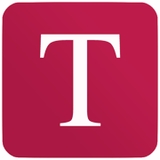