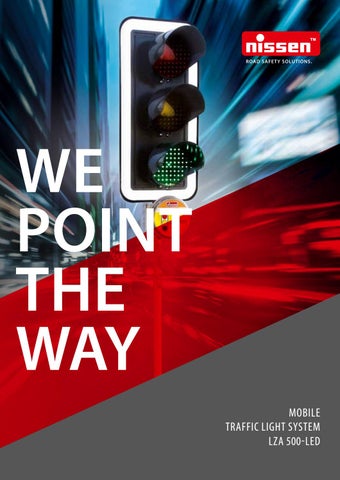 SWITCH TO SAFETY Easy to use, with many applications: the mobile traffic light system by Nissen provides for reliable and safe traffic controls at road construction sites irrespective of whether a simple bottleneck or more complex crossing situation is involved. When it becomes necessary to work on a road, problems with traffic flow are an inevitable consequence. If there is also a high volume of traffic, congestion and even accidents can result. With its LZA 500-LED mobile traffic light system developed and constructed in-house, Nissen provides a way of ensuring trouble-free and safe maintenance of traffic circulation.

OPTIMALLY POSITIONED The LZA 500-LED is of straightforward but robust construction and has an intuitively designed menu that excludes the risk of incorrect operation. The system can be used practically anywhere and can be adapted to the specific needs of the situation.

Ease of use Select from 52 pre-installed and self-explanatory programs depending on the size of the construction site, the volume of vehicles and vehicle speed. It is also possible to store up to 99 user-specific programs in its memory. A user prompt system and automatic plausibility check make operation childâ&#x20AC;&#x2DC;s play.

Flexible programs You can set up the system for operation in accordance with six different programs on each day of operation and thus accommodate it to any situation. Green and clearance phases can be manually entered or automatically calculated. Clearly defined authorisations In quartz mode, the pilot acts as program memory to ensure appropriate synchronisation of lights. If the system is wireless or cable-operated, the pilot protects the system against unauthorised interference. Country-specific configuration Even in its basic version, the LZA 500-LED comes with 13 different languages and default settings. In addition, seven country-specific light sequence cycles are available. Long service life The powerful rechargeable battery is accommodated in the transducer trolley. Thanks to the energy-saving LED technology, the system can be operated for up to 12Â days on a single charge. Practical timer The integrated GPS receiver allows use of the timer function and the pre-programming of various day and weekly sequences. Simple to transport The LZA 500-LED can be folded together for transport. This means you can transport a full traffic light system for a crossing on a single trailer. Security during transport When the system is folded together, the receiver mast can be securely attached to the transducer trolley, ensuring there is no risk of damage during transport.

ALL CLASSES Depending on the specific need, the LZA 500-LED can readily be adapted to the specifications of any light system class and thus conform to the stipulations of German RiLSA and TL-LSA 97.

More information NIS-00832 To be entered on nissen-germany.com

More information NIS-00833 To be entered on nissen-germany.com

MORE OPTIONS Thanks to the range of optional extras, the LZA 500-LED can be adapted to almost any situation.

Radar sensors Sensors detect the density and rate of traffic and vehicles approaching the system, thus making it possible to automatically operate the system to accommodate traffic flow. Signal auto-operation Avoids unnecessary waiting by motorists at quiet times. All signals are set to red until a vehicle approaches and the green signal is triggered for its direction of travel. Green phase extension Allows the green phase to be adapted to traffic density, thus improving traffic flow. Counter A counter in the amber light shows the remaining seconds until the next green phase. Motorists can see when theyâ&#x20AC;&#x2DC;ll be able to start and whether it is worth switching off the motor.

Public transport detector porte The LZA 500-LED has a porte for a public transport sensor. This will receive the signal emitted by buses, trams and ambulances. Providing for a suitable clearance phase, the system will then automatically switch to green to allow these priority passage.

Signal hood Ensures ready recognition of the signal even against the ambient light. Even with the hood in place, the LZA 500-LED can be readily folded together.

Remote control With the manual Pro-Remote device, you can readily operate and even program the LZA 500-LED from the comfort of your roadside truck - ideal for the colder seasons. 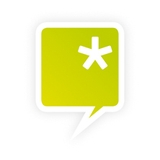