Path to the North Preview 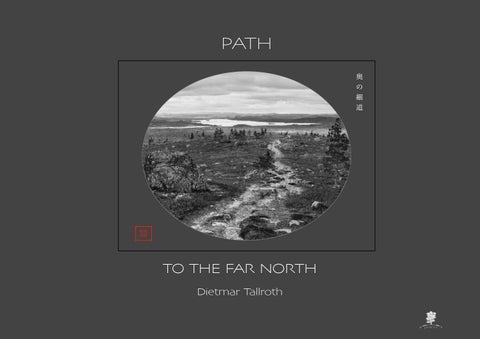 TO THE FAR NORTH Dietmar Tallroth

Path to the Far North A photographic conversation with BashĹ?

Got sick on the journey but my dreams keep wandering over wilted fields. Bashō’s last poem

Seeking understanding is a path fraught with risk. Even searching with intensity might come to nothing.

Dramatis personae Matsuo Bashō Born in 1644 to an impoverished samurai family, Bashō grew up serving as companion to his lord’s son. The two boys shared an interest in poetry and soon after his friend’s death in 1666, Bashō decided to pursue a career as professional poet. In 1672 he moved to Edo (Tokyo) where he soon became famous as a poet. At that time poetry was a favoured past-time of the rising merchant class of Edo. Chain-poems (renga) were created at special social events, where a master poet set the tone of the poem in a short verse, called hokku (later: haiku) and the other participants then contributed fitting verses. Bashō participated in many such events as the master poet but also gave poetry instruction to an increasing number of disciples. Starting in 1683 Bashō set out on a number of journeys, among them the journey to Oku, the interiors in the north of Honshu. His travel account, mixing prose and haiku and called Oku no hosomichi (The Narrow Road to the Deep North), became his best-known work.

In 1694, while travelling near Osaka, he fell seriously ill and died on November 28. He is considered the most important poet of the Edo period and is the best-known Japanese poet in the West.

Dietmar Tallroth Born in 1961 among the hills of Southern Germany, Dietmar Tallroth came already at a young age in contact with Japanese poetry and especially the works of Saigyō and Bashō. In 1997 he moved with his wife to Finland and now lives and works in Helsinki. Trained as a lawyer, he decided in 2011 to pursue a second career as a landscape and architecture photographer. In 2015 he published his first photo book about Helsinki’s architecture.

Path to the North Preview