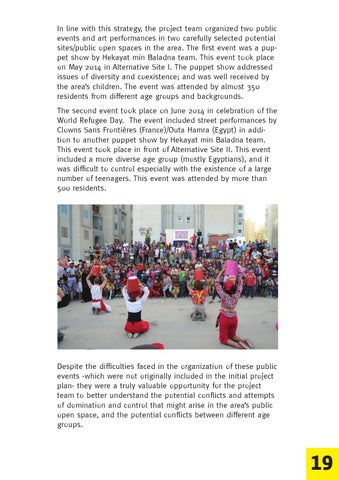 In line with this strategy, the project team organized two public events and art performances in two carefully selected potential sites/public open spaces in the area. The first event was a puppet show by Hekayat min Baladna team. This event took place on May 2014 in Alternative Site I. The puppet show addressed issues of diversity and coexistence; and was well received by the area’s children. The event was attended by almost 350 residents from different age groups and backgrounds. The second event took place on June 2014 in celebration of the World Refugee Day. The event included street performances by Clowns Sans Frontières (France)/Outa Hamra (Egypt) in addition to another puppet show by Hekayat min Baladna team. This event took place in front of Alternative Site II. This event included a more diverse age group (mostly Egyptians), and it was difficult to control especially with the existence of a large number of teenagers. This event was attended by more than 500 residents.

Despite the difficulties faced in the organization of these public events -which were not originally included in the initial project plan- they were a truly valuable opportunity for the project team to better understand the potential conflicts and attempts of domination and control that might arise in the area’s public open space, and the potential conflicts between different age groups. 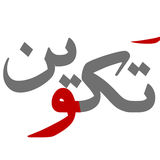 ‘Geneina’ is the new open space located in Masaken Othman area (6th of October City), providing a recreational communal node that serves the...

‘Geneina’ is the new open space located in Masaken Othman area (6th of October City), providing a recreational communal node that serves the...