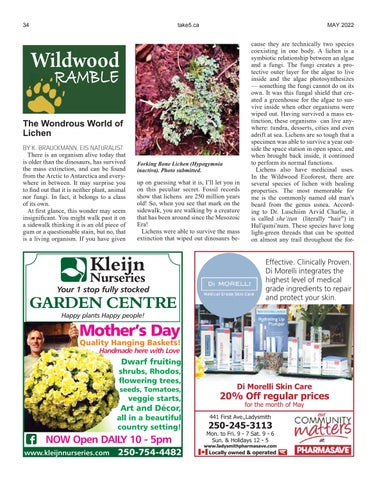 The Wondrous World of Lichen BY K. BRAUCKMANN, EIS NATURALIST There is an organism alive today that is older than the dinosaurs, has survived the mass extinction, and can be found from the Arctic to Antarctica and everywhere in between. It may surprise you to find out that it is neither plant, animal nor fungi. In fact, it belongs to a class of its own. At first glance, this wonder may seem insignificant. You might walk past it on a sidewalk thinking it is an old piece of gum or a questionable stain, but no, that is a living organism. If you have given

up on guessing what it is, I’ll let you in on this peculiar secret. Fossil records show that lichens are 250 million years old! So, when you see that mark on the sidewalk, you are walking by a creature that has been around since the Mesozoic Era! Lichens were able to survive the mass extinction that wiped out dinosaurs be-

cause they are technically two species coexisting in one body. A lichen is a symbiotic relationship between an algae and a fungi. The fungi creates a protective outer layer for the algae to live inside and the algae photosynthesizes — something the fungi cannot do on its own. It was this fungal shield that created a greenhouse for the algae to survive inside when other organisms were wiped out. Having survived a mass extinction, these organisms can live anywhere: tundra, desserts, cities and even adrift at sea. Lichens are so tough that a specimen was able to survive a year outside the space station in open space, and when brought back inside, it continued to perform its normal functions. Lichens also have medicinal uses. In the Wildwood Ecoforest, there are several species of lichen with healing properties. The most memorable for me is the commonly named old man’s beard from the genus usnea. According to Dr. Luschiim Arvid Charlie, it is called she’itun (literally “hair”) in Hul’qumi’num. These species have long light-green threads that can be spotted on almost any trail throughout the for-

News and stories from central Vancouver Island communities including south Nanaimo, Chase River, Cinnebar Valley, Extension, Timberlands, South Wellington, Cassidy, Cedar, Yellow Point, North Oyster, Ladysmith, Saltair, and Chemainus. The TAKE 5 is a monthly magazine in print and digital format. The print edition is delivered by Canada Post to all households in the area, plus counter copies are available throughout the community. The digital edition is available on our website take5.ca and is shared widely on social media. Some regular columns include home and garden, arts and entertainment, heritage, dining and wine, the environment, and rural living. We are 100% local, and independent. Publishing since 1997, we are the number one read magazine in the area. 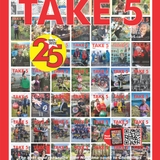