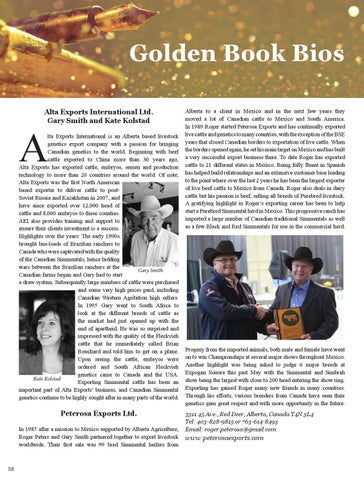 lta Exports International is an Alberta based livestock genetics export company with a passion for bringing Canadian genetics to the world. Beginning with beef cattle exported to China more than 30 years ago, Alta Exports has exported cattle, embryos, semen and production technology to more than 20 countries around the world. Of note, Alta Exports was the first North American based exporter to deliver cattle to postSoviet Russia and Kazakhstan in 2007, and have since exported over 12,000 head of cattle and 8,000 embryos to these counties. AEI also provides training and support to ensure their clients investment is a success. Highlights over the years: The early 1990s brought bus-loads of Brazilian ranchers to Canada who were captivated with the quality of the Canadian Simmentals, hence bidding wars between the Brazilian ranchers at the Canadian farms began and Gary had to start a draw system. Subsequently large numbers of cattle were purchased and some very high prices paid, including Canadian Western Agribition high sellers. In 1995 Gary went to South Africa to look at the different breeds of cattle as the market had just opened up with the end of apartheid. He was so surprised and impressed with the quality of the Fleckvieh cattle that he immediately called Brian Bouchard and told him to get on a plane. Upon seeing the cattle, embryos were ordered and South African Fleckvieh genetics came to Canada and the USA. Exporting Simmental cattle has been an important part of Alta Exportsâ&#x20AC;&#x2122; business, and Canadian Simmental genetics continue to be highly sought after in many parts of the world.

Peterosa Exports Ltd. In 1985 after a mission to Mexico supported by Alberta Agriculture, Roger Peters and Gary Smith partnered together to export livestock worldwide. Their first sale was 99 bred Simmental heifers from

Alberta to a client in Mexico and in the next few years they moved a lot of Canadian cattle to Mexico and South America. In 1989 Roger started Peterosa Exports and has continually exported live cattle and genetics to many countries, with the exception of the BSE years that closed Canadian borders to exportation of live cattle. When the borders opened again, he set his main target on Mexico and has built a very successful export business there. To date Roger has exported cattle to 21 different states in Mexico. Being fully fluent in Spanish has helped build relationships and an extensive customer base leading to the point where over the last 2 years he has been the largest exporter of live beef cattle to Mexico from Canada. Roger also deals in dairy cattle but his passion is beef, selling all breeds of Purebred livestock. A gratifying highlight in Rogerâ&#x20AC;&#x2122;s exporting career has been to help start a Purebred Simmental herd in Mexico. This progressive ranch has imported a large number of Canadian traditional Simmentals as well as a few Black and Red Simmentals for use in the commercial herd.

Progeny from the imported animals, both male and female have went on to win Championships at several major shows throughout Mexico. Another highlight was being asked to judge 6 major breeds at Expogan Sonora this past May with the Simmental and Simbrah show being the largest with close to 200 head entering the show ring. Exporting has gained Roger many new friends in many countries. Through his efforts, various breeders from Canada have seen their genetics gain great respect and with more opportunity in the future. 5311 45 Ave., Red Deer, Alberta, Canada T4N 3L4 Tel: 403-828-9815 or 763-614-8493 Email: roger.peterosa@gmail.com 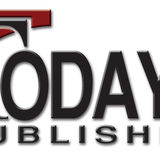