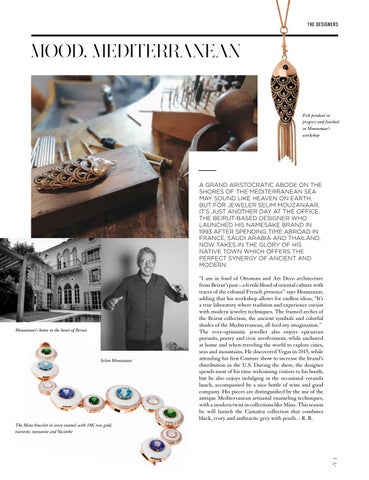 Fish pendant in progress and finished in Mouzanaar’s workshop

A GRAND ARISTOCRATIC ABODE ON THE SHORES OF THE MEDITERRANEAN SEA MAY SOUND LIKE HEAVEN ON EARTH, BUT FOR JEWELER SELIM MOUZANAAR, IT’S JUST ANOTHER DAY AT THE OFFICE. THE BEIRUT-BASED DESIGNER WHO LAUNCHED HIS NAMESAKE BRAND IN 1993 AFTER SPENDING TIME ABROAD IN FRANCE, SAUDI ARABIA AND THAILAND, NOW TAKES IN THE GLORY OF HIS NATIVE TOWN WHICH OFFERS THE PERFECT SYNERGY OF ANCIENT AND MODERN.

Mouzanaar’s home in the heart of Beruit

“I am in fond of Ottoman and Art Deco architecture from Beirut’s past – a fertile blend of oriental culture with traces of the colonial French presence” says Mounazaar, adding that his workshop allows for endless ideas, “It’s a true laboratory where tradition and experience coexist with modern jewelry techniques. The framed arches of the Beirut collection, the ancient symbols and colorful shades of the Mediterranean, all feed my imagination.” The ever-optimistic jeweller also enjoys epicurean pursuits, poetry and civic involvement, while anchored at home and when traveling the world to explore cities, seas and mountains. He discovered Vegas in 2015, while attending his first Couture show to increase the brand’s distribution in the U.S. During the show, the designer spends most of his time welcoming visitors to his booth, but he also enjoys indulging in the occasional veranda lunch, accompanied by a nice bottle of wine and good company. His pieces are distinguished by the use of the antique Mediterranean artisanal enameling techniques, with a modern twist in collections like Mina. This season he will launch the Camaïeu collection that combines black, ivory and anthracite grey with pearls. - R. R.