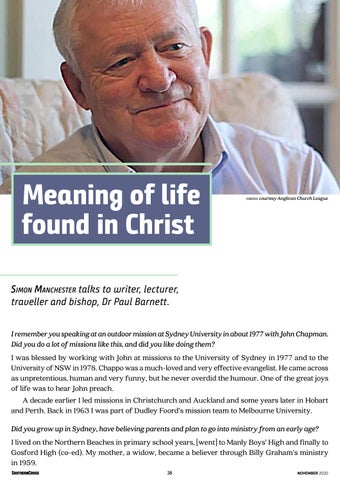 Meaning of life found in Christ

Simon Manchester talks to writer, lecturer, traveller and bishop, Dr Paul Barnett. I remember you speaking at an outdoor mission at Sydney University in about 1977 with John Chapman. Did you do a lot of missions like this, and did you like doing them? I was blessed by working with John at missions to the University of Sydney in 1977 and to the University of NSW in 1978. Chappo was a much-loved and very effective evangelist. He came across as unpretentious, human and very funny, but he never overdid the humour. One of the great joys of life was to hear John preach. A decade earlier I led missions in Christchurch and Auckland and some years later in Hobart and Perth. Back in 1963 I was part of Dudley Foord’s mission team to Melbourne University. Did you grow up in Sydney, have believing parents and plan to go into ministry from an early age? I lived on the Northern Beaches in primary school years, [went] to Manly Boys’ High and finally to Gosford High (co-ed). My mother, a widow, became a believer through Billy Graham’s ministry in 1959. SouthernCross

The News Magazine for Sydney Anglicans