Deep in the Heart of Texas 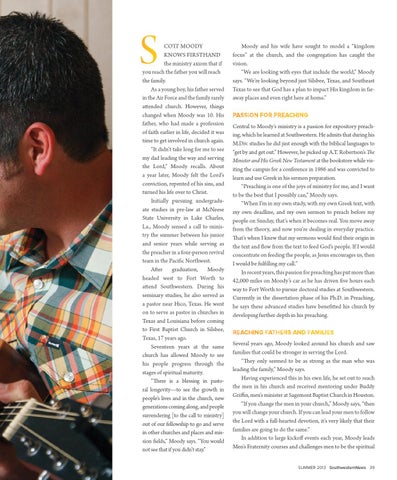 cott Moody knows firsthand the ministry axiom that if you reach the father you will reach the family. As a young boy, his father served in the Air Force and the family rarely attended church. However, things changed when Moody was 10. His father, who had made a profession of faith earlier in life, decided it was time to get involved in church again. “It didn’t take long for me to see my dad leading the way and serving the Lord,” Moody recalls. About a year later, Moody felt the Lord’s conviction, repented of his sins, and turned his life over to Christ. Initially pursuing undergraduate studies in pre-law at McNeese State University in Lake Charles, La., Moody sensed a call to ministry the summer between his junior and senior years while serving as the preacher in a four-person revival team in the Pacific Northwest. After graduation, Moody headed west to Fort Worth to attend Southwestern. During his seminary studies, he also served as a pastor near Hico, Texas. He went on to serve as pastor in churches in Texas and Louisiana before coming to First Baptist Church in Silsbee, Texas, 17 years ago. Seventeen years at the same church has allowed Moody to see his people progress through the stages of spiritual maturity. “There is a blessing in pastoral longevity—to see the growth in people’s lives and in the church, new generations coming along, and people surrendering [to the call to ministry] out of our fellowship to go and serve in other churches and places and mission fields,” Moody says. “You would not see that if you didn’t stay.”

Moody and his wife have sought to model a “kingdom focus” at the church, and the congregation has caught the vision. “We are looking with eyes that include the world,” Moody says. “We’re looking beyond just Silsbee, Texas, and Southeast Texas to see that God has a plan to impact His kingdom in faraway places and even right here at home.” Passion for Preaching Central to Moody’s ministry is a passion for expository preaching, which he learned at Southwestern. He admits that during his M.Div. studies he did just enough with the biblical languages to “get by and get out.” However, he picked up A.T. Robertson’s The Minister and His Greek New Testament at the bookstore while visiting the campus for a conference in 1986 and was convicted to learn and use Greek in his sermon preparation. “Preaching is one of the joys of ministry for me, and I want to be the best that I possibly can,” Moody says. “When I’m in my own study, with my own Greek text, with my own deadline, and my own sermon to preach before my people on Sunday, that’s when it becomes real. You move away from the theory, and now you’re dealing in everyday practice. That’s when I knew that my sermons would find their origin in the text and flow from the text to feed God’s people. If I would concentrate on feeding the people, as Jesus encourages us, then I would be fulfilling my call.” In recent years, this passion for preaching has put more than 42,000 miles on Moody’s car as he has driven five hours each way to Fort Worth to pursue doctoral studies at Southwestern. Currently in the dissertation phase of his Ph.D. in Preaching, he says these advanced studies have benefitted his church by developing further depth in his preaching. Reaching Fathers and Families Several years ago, Moody looked around his church and saw families that could be stronger in serving the Lord. “They only seemed to be as strong as the man who was leading the family,” Moody says. Having experienced this in his own life, he set out to reach the men in his church and received mentoring under Buddy Griffin, men’s minister at Sagemont Baptist Church in Houston. “If you change the men in your church,” Moody says, “then you will change your church. If you can lead your men to follow the Lord with a full-hearted devotion, it’s very likely that their families are going to do the same.” In addition to large kickoff events each year, Moody leads Men’s Fraternity courses and challenges men to be the spiritual summer 2013  SouthwesternNews  39

Deep in the Heart of Texas

Underneath the wide and high sky of the Lone Star State, from metro cities to lonely towns, Southwesterners are shining the Gospel of Jesus Christ big and bright deep in the heart of Texas and beyond. 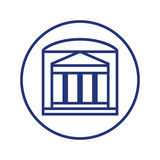