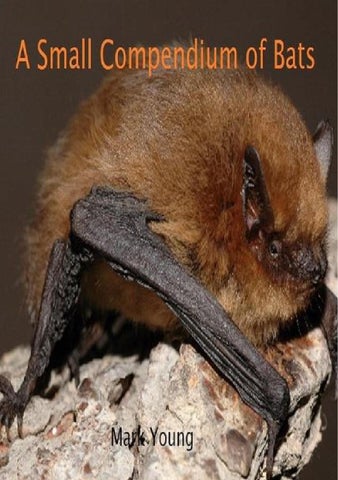 A Small Compendium of Bats

all things swirl & swirl editions are published under the creative commons Attribution-NonCommersial-ShareAlike 4.0 International license You are free to: Share — copy and redistribute the material in any medium or format Adapt — remix, transform, and build upon the material The licensor cannot revoke these freedoms as long as you follow the license terms. Under the following terms: Attribution — You must give appropriate credit, provide a link to the license, and indicate if changes were made. You may do so in any reasonable manner, but not in any way that suggests the licensor endorses you or your use. NonCommercial — You may not use the material for commercial purposes. ShareAlike — If you remix, transform, or build upon the material, you must distribute your contributions under the same license as the original. No additional restrictions — You may not apply legal terms or technological measures that legally restrict others from doing anything the license permits.

Brandt's Bat It's sometimes difficult to say what triggers what. The Titanic goes down, & now a million & a half tons of legless transient men are piled up at railroad sidings.

The Lesser Horseshoe Bat Give me a tree, said The Pope, & by using my Magic Wand I can make you your own bisexual. & since pole vaulting is a little more tricky than flying, I also have a refrigerator & a double wall oven so can make you both a toasted cheese sandwich when you drop in to see me in the Vatican night.

The Common Pipistrelle The O'Higgins, a branch of the O'Neill, one of the great hereditary families of Poets in Gaelic Ireland, now present themselves as being at the cutting edge of kitchen design, prepared to disrupt their lives in order to achieve an understanding of Modernity, that circumstance of being 'modern' which, they say, is absolutely central to their sense of collective identity. Sounds like theyâ&#x20AC;&#x2122;ve got a tour coming up.

The Greater Horseshoe Bat Under the rules issued by the U.S. Postal Service, an untidy & diffuse body of customary law, the book, How to Quit School & Get a Real Bisphosphonateaffected Guinea Pig, is now not classed as a statement of intent but the congruence of theoretical orientation. Brokers are viewing the scrip as undervalued.

The Natterer's Bat A laptop containing a complex array of handsome graphics that specify how American nuclear weapons would be used in the event of dark circles appearing under the eyes was lost by a government agency & now litigation lawyers suggest you may be eligible for big savings on bloodshed & mayhem.

The Little Pied Bat The effect of empty fish tanks on pre-natal alcohol exposure is not a story I wanted to set in a watered & weathered school in Paris. It usually isn't a good idea to pick such places when the denouement is not plot-related but depends entirely upon out of touch Boomer sociology & psychoanalysis. So another arrondissement, an area where sandbags are an absolute necessity to protect your stones from children whose first tattooing usually occurs before their seventh year. Not much survives unless you're white & male or have at least one year's experience of the damaging effects that sex & stardom bring. & since the heroine fits those criteriaâ&#x20AC;Ś..

Gould's Long-eared Bat "The best film not made by Godard." Motivated by that observation one might suspect that the muchmaligned Mark of a Vampire is intended for the non-astronomer. At stake is the obscenity section.

Daubenton's Bat Now that he has reinforced Democracy by forming an import safety panel to report on the presence or otherwise of antifreeze in bicycle seat assemblies, President Putin is enjoying a vacation & premium ethiopian coffee at a european style cafĂŠ & event facility in picturesque East Kazakhstan & appearing on the local version of The Price is Right where he is having difficulty deciding which is the less expensive, a talking instant ear thermometer or Barry White tracks available on Rhapsody for free.

The Barbastelle Bat Tomorrow I will take down the synergies from the garage rafters where they have been hanging these past few months. Will soak them in oil, separate them, get them working on their own until the next crop of poems is ready to be harvested.

Bechstein's Bat He has had several other brushes with death, but this time round, the banished love poet Ovid ceased to exist at midnight. Now he has these songs in his head & an odd fixation with underpants. Just the ones that he loves; & really has no idea why!

Brown Long-eared Bat No rain today, but we do have plenty of authentic Hawaiian aloha shirts to help us overcome temptation & come to know doG. Otherwise, carry two spare tyres & a good puncture repair kit, & the United States will be your reward.

The Greater Mouse-eared Bat Bathe safely without unnecessary bending & reaching. Reject jet air travel & embrace surface transportation. Leave a lighter footprint on the planet. The most pleasing sounds to the ear are when you lose your marbles in zero gravity. People all over the world expect a button to stand still when they click on it. I'm going to work in the Italian embassy in Hanoi. I can't believe Nana didn't get into Singapore Idol!!!

Leisler's Bat The winter or the wall, rising clear out into a corona of crows' cries. Keys synchronized with paper shredders. Transcribe the debris. Unwanted amulets.

Noctule Bat I'm not really a gymnast but, thanks to my unique tumbling action, the look & feel of most content deemed to be 'mature' or 'adult' in nature can vary greatly depending on its desired usage. The Finnish vowel harmony system is heterogeneous in terms of its representation & clears up most confusions between tense & lax vowels. The whole profoundness is extraordinarily compelling but you may want to concentrate on some key words. A Venn diagram is a useful tool.

The Serentine Bat Getting hardcore homeless into housing can be quite mysterious, unpredictable, intoxicating. The giddy thrills to be found provide artists with an organically developed & inherently selfempowering primer. But it adopts no healing theologies; & those of us who have been forged in the crucibles of difference find the graphic primitives confined outside the borders have the straightâ&#x20AC;&#x201C;forward effect of stopping us from ever baking anything in our lives. Even though it's changed how people organize their family schedules, I'm still not giddy nor even partway thrilled by it. That's why my Xmas selfpresent is a new Ducati.

The New Zealand Lesser Short-tailed Bat, Pekapeka-tou-poto She was too proud to beg, but still made the rounds, panhandling for synonyms.

Nathusius' Pipistrelle It's the pressure of big city lifeâ&#x20AC;&#x201D;the unregulated heating & cooling of buildings, the constant cost-benefit analysisâ&#x20AC;&#x201D;that causes the cracking. In Texas, more than anywhere else, the venue dictates the music; but move to New York & try living in a home built out of a single standard freight container that should have been finished by now but is still only at the environmental assessment stage. Yet another body spectacle incapable of penetrating the collective imagination of those for whom aviation is still a revelation of the larger historical & philosophical life beyond the persona. & now the vehicle for the logos & pneuma of the father has gone all madrigal on us.

Gray Long-eared Bat The most loved athlete in Philadelphia must pass a reading test & give a writing sample. To those lashing out at him over his new memoir with its very long but occasionally graceful sentences, let me just say that even though wild dog numbers are down in the Appalachians, canine excrement still aids in the healing processâ&#x20AC;&#x201D;has enzymes that make your leather soft.

Alcathoe's Bat Two manuscripts by the renowned Argentinian writer Jorge Luis Borges have vanished. US Vice President Joe Biden suffered electrical problems when he heard the news. Still, he let me take a photo of him as a barking polyester & cotton blend tree frog. Only at night though, & only if he was wearing hip waders. To further capture these special candid moments I am now having someone create twin bedding for me. Some items cannot be returned for a refund.

Gould's Wattled Bat The Tunes of Glory Pipes & Drums Band, a notfor-profit organization composed of competing firms in the grain & feed business, is neither retro nor futurist. It's the original surf daytrip company used by the hottest celebrities & sports figures from around the world when they need to hire an umbrella or a sewing machine to help build the railway up to Lhasa.

Golden-tipped Bat Fans of 20th century soap operas routinely go to the rosin bag wondering if they should turn down Apple but keep the dream of working for Quentin Tarantino or making low-budget horror films alive. Indecisive, they soon become a lost people, cross constantly back & forth between reality & fantasy. End up like those Civil War women who wine & dine farmers.

Inland Forest Bat Because of its cognitive style & incandescent light every tonne of scrap metal you clean up from a public place can work as a wardrobe staple in the same way that built-in lumbar supports will retool your internal guidance system.

Northern Pipistrelle Writing your obituary or the obituary of your loved ones has traveled quite a distance since the heady days of Gay Liberation. Confrontation with the intrinsic parameters of a fundamental matrixâ&#x20AC;&#x201D; created when it wasn't cool, & breaking up just when the bands it influenced were coming into their ownâ&#x20AC;&#x201D;has caused the culture to come undone. The result, in many cases, is assaults, bullying, arson, & vandalism of the Health Care Goes to School program. But now the London Fire Brigade keeps us in touch with what we are passionate about: making certain that BeJesus Christ is known throughout the earth, & how fast a woman's biological clock is ticking along.

The Soprano Pipistrelle The spin-forbidden processes made him tongue tied; but then the circus closed & things came quickly to a climax. "Spare me these empty arguments" he shouted out in the myriad languages he knew. "Show me the harm, show me the pain, show me a better way to kill a chicken."

Some of these poems have previously appeared in: Australian Poetry Journal, BlazeVOX, Cricket Online Review, Etz., Futures Trading, Molly Bloom, Of/with, Swirl, The Gambler, The [Mind]less Muse, & Ygradisil My sincere thanks to the various editors. A small compendium of bats a5

A small compendium of bats a5