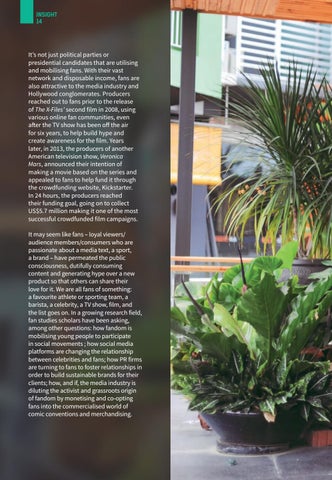 It’s not just political parties or presidential candidates that are utilising and mobilising fans. With their vast network and disposable income, fans are also attractive to the media industry and Hollywood conglomerates. Producers reached out to fans prior to the release of The X-Files’ second film in 2008, using various online fan communities, even after the TV show has been off the air for six years, to help build hype and create awareness for the film. Years later, in 2013, the producers of another American television show, Veronica Mars, announced their intention of making a movie based on the series and appealed to fans to help fund it through the crowdfunding website, Kickstarter. In 24 hours, the producers reached their funding goal, going on to collect US$5.7 million making it one of the most successful crowdfunded film campaigns. It may seem like fans – loyal viewers/ audience members/consumers who are passionate about a media text, a sport, a brand – have permeated the public consciousness, dutifully consuming content and generating hype over a new product so that others can share their love for it. We are all fans of something: a favourite athlete or sporting team, a barista, a celebrity, a TV show, film, and the list goes on. In a growing research field, fan studies scholars have been asking, among other questions: how fandom is mobilising young people to participate in social movements ; how social media platforms are changing the relationship between celebrities and fans; how PR firms are turning to fans to foster relationships in order to build sustainable brands for their clients; how, and if, the media industry is diluting the activist and grassroots origin of fandom by monetising and co-opting fans into the commercialised world of comic conventions and merchandising.

In this issue of Discover, the impact of big data analysis is explored through various fields of research including evacuation systems, cancer diagnosis and treatment, geology and renewable energy. 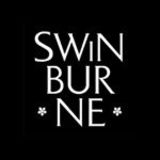