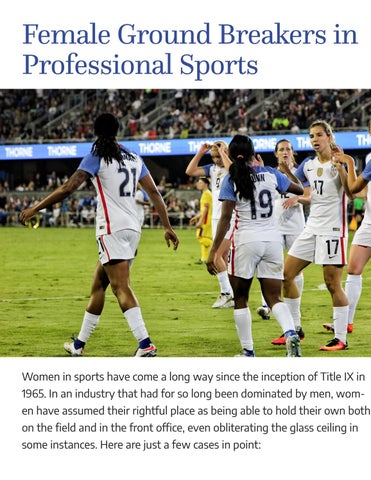 Michele Roberts was ranked Numero Uno by a panel of sports insiders for the top spot on a list of “The 25 Most Powerful Women in Sports,” and for good reason. As the current executive director of the NBA Players Association, Roberts represents the interests of over 300 of the best basketball players in the world. Michele is the first woman to ever hold the position and is first woman to head a major professional sports union in the United States. A graduate of UC Berkeley Law and former trial attorney, Roberts success is an inspiration to women everywhere.

Legends in the making and double trouble for opposing teams, point guards Diana Taurasi of the Phoenix Mercury and Sue Bird of the Seattle Storm account for a combined eight Olympic and seven FIBA World Cup gold medals and will again team up for the 2020 Olympics. Taurasi was the first WNBA player to score 8,000 points and is the league’s all-time leader in field goals. One of the highest paid female athletes in the world, at 38 years old Sue Bird is still a backcourt phenom with ball-handling skills that rival those of any basketball player, male or female, at any level. Unless one of them breaks a leg, the 2020 gold medal should be a lock for Team USA.

Women in sports have come a long way since the inception of Title IX in 1965. In an industry that had for so long been dominated by men, women have assumed their rightful place as being able to hold their own both on the field and in the front office, even obliterating the glass ceiling in some instances. Here are just a few cases in point:

Very few players can start out at the top and stay there, but Alex Morgan has made it look easy. Soccer fans will never forget Alex Morgan’s game-winning shot in overtime that beat Canada and sent the USA Women to the gold medal match vs Japan in the 2012 London Olympic Games. Since her juggernaut debut, Alex has played professionally at home and abroad, including a stint with the French Olympique Lyonnais, where she helped the team win a French Cup and UEFA title. Most recently, in July of 2019, Morgan once again help the U.S. team win the FIFA Women’s World Cup and was awarded the Silver Boot.

Ranked as Number One in the world eight different times, Serena Williams has won more combined Grand Slam tennis titles then any active player, with 39 major victories. Serena is the most recent female player to hold all four of the singles Grand Slam titles at once, is only the third player in professional tennis history to do it more than once and is also the most recent player to win a championship on hard court, grass and clay in one year. With over $28 million in earnings in 2016 and again in 2017, Williams was the only woman to make Forbes’ list of the 100 highest paid athletes. At 37 years old in 2019, Williams is ranked 8th in the world and will arguably go down in history as one of the greatest female athletes of all time.