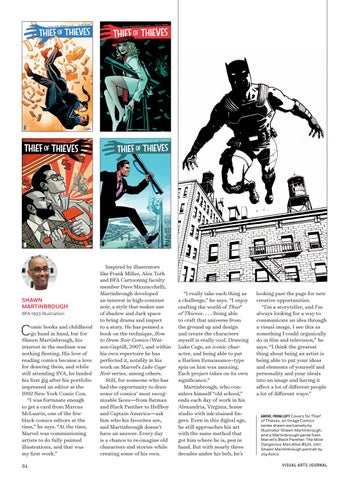 omic books and childhood go hand in hand, but for Shawn Martinbrough, his interest in the medium was nothing fleeting. His love of reading comics became a love for drawing them, and while still attending SVA, he landed his first gig after his portfolio impressed an editor at the 1992 New York Comic Con. “I was fortunate enough to get a card from Marcus McLaurin, one of the few black comics editors at the time,” he says. “At the time, Marvel was commissioning artists to do fully painted illustrations, and that was my first work.”

Inspired by illustrators like Frank Miller, Alex Toth and BFA Cartooning faculty member Dave Mazzucchelli, Martinbrough developed an interest in high-contrast noir, a style that makes use of shadow and dark space to bring drama and impact to a story. He has penned a book on the technique, How to Draw Noir Comics (Watson-Guptill, 2007), and within his own repertoire he has perfected it, notably in his work on Marvel’s Luke Cage Noir series, among others. Still, for someone who has had the opportunity to draw some of comics’ most recognizable faces—from Batman and Black Panther to Hellboy and Captain America—ask him who his favorites are, and Martinbrough doesn’t have an answer. Every day is a chance to re-imagine old characters and stories while creating some of his own.

“I really take each thing as a challenge,” he says. “I enjoy crafting the world of Thief of Thieves. . . . Being able to craft that universe from the ground up and design and create the characters myself is really cool. Drawing Luke Cage, an iconic character, and being able to put a Harlem Renaissance–type spin on him was amazing. Each project takes on its own significance.” Martinbrough, who considers himself “old school,” ends each day of work in his Alexandria, Virginia, home studio with ink-stained fingers. Even in this digital age, he still approaches his art with the same method that got him where he is, pen in hand. But with nearly three decades under his belt, he’s

looking past the page for new creative opportunities. “I’m a storyteller, and I’m always looking for a way to communicate an idea through a visual image. I see this as something I could organically do in film and television,” he says. “I think the greatest thing about being an artist is being able to put your ideas and elements of yourself and personality and your ideals into an image and having it affect a lot of different people a lot of different ways.”

ABOVE, FROM LEFT Covers for Thief

The future of VR, the political potential of art and design, photographer Shen Wei, and more. 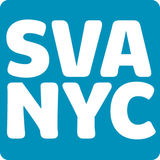