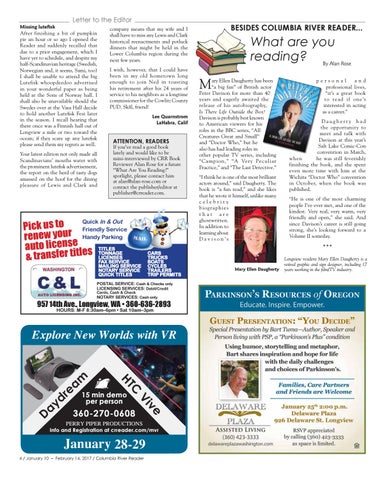 Letter to the Editor Missing lutefisk After finishing a bit of pumpkin pie an hour or so ago I opened the Reader and suddenly recalled that due to a prior engagement, which I have yet to schedule, and despite my half-Scandinavian heritage (Swedish, Norwegian and, it seems, Sami, too) I shall be unable to attend the big Lutefisk whoopdeedoo advertised in your wonderful paper as being held at the Sons of Norway hall. I shall also be unavailable should the Swedes over at the Vasa Hall decide to hold another Lutefisk Fest later in the season. I recall hearing that there once was a Finnish hall out of Longview a mile or two toward the ocean; if they scare up any lutefisk please send them my regrets as well. Your latest edition not only made all Scandinavians’ mouths water with the prominent lutefisk advertisement, the report on the herd of tasty dogs amassed on the hoof for the dining pleasure of Lewis and Clark and

I wish, however, that I could have been in my old hometown long enough to join Ned in toasting his retirement after his 24 years of service to his neighbors as a longtime commissioner for the Cowlitz County PUD. Skål, friend! Lee Quarnstrom LaHabra, Calif

If you’ve read a good book lately and would like to be mini-interviewed by CRR Book Reviewer Alan Rose for a future “What Are You Reading?” spotlight, please contact him at alan@alan-rose.com or contact the publisher/editor at publisher@crreader.com.

What are you reading? By Alan Rose

ary Ellen Daugherty has been “a big fan” of British actor Peter Davison for more than 40 years and eagerly awaited the release of his autobiography, Is There Life Outside the Box? Davison is probably best known to American viewers for his roles in the BBC series, “All Creatures Great and Small” and “Doctor Who,” but he also has had leading roles in other popular TV series, including “Campion,” “A Very Peculiar Practice,” and “The Last Detective.” “I think he is one of the most brilliant actors around,” said Daugherty. The book is “a fun read,” and she likes that he wrote it himself, unlike many celebrity biographies that are ghostwritten. In addition to learning about D a v i s o n ’s

personal and professional lives, “it’s a great book to read if one’s interested in acting as a career.” Daugherty had the opportunity to meet and talk with Davison at this year’s Salt Lake Comic-Con convention in March, when he was still feverishly finishing the book, and she spent even more time with him at the Wichita “Doctor Who” convention in October, when the book was published. “He is one of the most charming people I’ve ever met, and one of the kindest. Very real, very warm, very friendly and open,” she said. And since Davison’s career is still going strong, she’s looking forward to a Volume II someday. •••

company means that my wife and I shall have to miss any Lewis and Clark historical reenactments and potluck dinners that might be held in the Lower Columbia region during the next few years.

Info and Registration at crreader.com/mvr

Longview resident Mary Ellen Daugherty is a retired graphic and sign designer, including 17 years working in the film/TV industry. 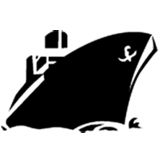 4 Letters to the Editor 4 Besides CRR...What Are You Reading? 5 My Slant: Bringing Your New Year’s Dream to Life 6 To Your Health: A New Yea...

4 Letters to the Editor 4 Besides CRR...What Are You Reading? 5 My Slant: Bringing Your New Year’s Dream to Life 6 To Your Health: A New Yea...