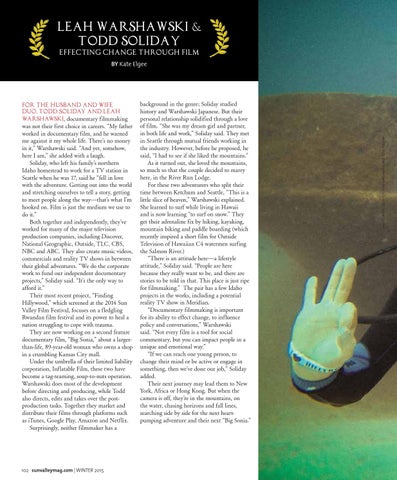 For the husband and wife duo, Todd Soliday and Leah Warshawski, documentary filmmaking

was not their first choice in careers. “My father worked in documentary film, and he warned me against it my whole life. There’s no money in it,” Warshawski said. “And yet, somehow, here I am,” she added with a laugh. Soliday, who left his family’s northern Idaho homestead to work for a TV station in Seattle when he was 17, said he “fell in love with the adventure. Getting out into the world and stretching ourselves to tell a story, getting to meet people along the way—that’s what I’m hooked on. Film is just the medium we use to do it.” Both together and independently, they’ve worked for many of the major television production companies, including Discover, National Geographic, Outside, TLC, CBS, NBC and ABC. They also create music videos, commercials and reality TV shows in between their global adventures. “We do the corporate work to fund our independent documentary projects,” Soliday said. “It’s the only way to afford it.” Their most recent project, “Finding Hillywood,” which screened at the 2014 Sun Valley Film Festival, focuses on a fledgling Rwandan film festival and its power to heal a nation struggling to cope with trauma. They are now working on a second feature documentary film, “Big Sonia,” about a largerthan-life, 89-year-old woman who owns a shop in a crumbling Kansas City mall. Under the umbrella of their limited liability corporation, Inflatable Film, these two have become a tag-teaming, soup-to-nuts operation. Warshawski does most of the development before directing and producing, while Todd also directs, edits and takes over the postproduction tasks. Together they market and distribute their films through platforms such as iTunes, Google Play, Amazon and Netflix. Surprisingly, neither filmmaker has a

background in the genre; Soliday studied history and Warshawski Japanese. But their personal relationship solidified through a love of film. “She was my dream girl and partner, in both life and work,” Soliday said. They met in Seattle through mutual friends working in the industry. However, before he proposed, he said, “I had to see if she liked the mountains.” As it turned out, she loved the mountains, so much so that the couple decided to marry here, in the River Run Lodge. For these two adventurers who split their time between Ketchum and Seattle, “This is a little slice of heaven,” Warshawski explained. She learned to surf while living in Hawaii and is now learning “to surf on snow.” They get their adrenaline fix by hiking, kayaking, mountain biking and paddle boarding (which recently inspired a short film for Outside Television of Hawaiian C4 watermen surfing the Salmon River.) “There is an attitude here—a lifestyle attitude,” Soliday said. “People are here because they really want to be, and there are stories to be told in that. This place is just ripe for filmmaking.” The pair has a few Idaho projects in the works, including a potential reality TV show in Meridian. “Documentary filmmaking is important for its ability to effect change, to influence policy and conversations,” Warshawski said. “Not every film is a tool for social commentary, but you can impact people in a unique and emotional way.” “If we can reach one young person, to change their mind or be active or engage in something, then we’ve done our job,” Soliday added. Their next journey may lead them to New York, Africa or Hong Kong. But when the camera is off, they’re in the mountains, on the water, chasing horizons and fall lines, searching side by side for the next heartpumping adventure and their next “Big Sonia.”

By, for and about people who love Sun Valley, Idaho. 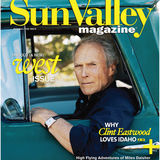