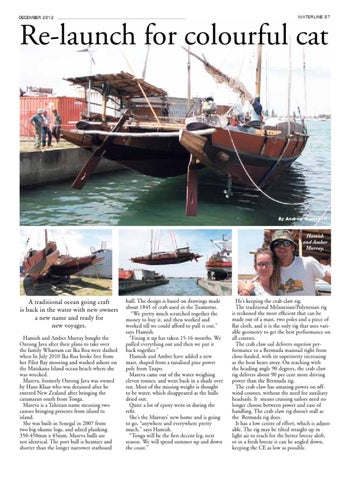 A traditional ocean going craft is back in the water with new owners a new name and ready for new voyages. Hamish and Amber Murray bought the Ontong Java after their plans to take over the family Wharram cat Ika Roa were dashed when In July 2010 Ika Roa broke free from her Pilot Bay mooring and washed ashore on the Matakana Island ocean beach where she was wrecked. Mareva, formerly Ontong Java was owned by Hans Klaar who was detained after he entered New Zealand after bringing the catamaran south from Tonga. Mareva is a Tahitian name meaning two canoes bringing presents from island to island. She was built in Senegal in 2007 from two big okume logs, and adzed planking 350-450mm x 45mm. Mareva hulls are not identical. The port hull is beamier and shorter than the longer narrower starboard

hull. The design is based on drawings made about 1845 of craft used in the Tuamotus. “We pretty much scratched together the money to buy it, and then worked and worked till we could afford to pull it out,” says Hamish. “Fixing it up has taken 15-16 months. We pulled everything out and then we put it back together.” Hamish and Amber have added a new mast, shaped from a tanalised pine power pole from Taupo. Mareva came out of the water weighing eleven tonnes, and went back in a shade over ten. Most of the missing weight is thought to be water, which disappeared as the hulls dried out. Quite a lot of epoxy went in during the refit. She’s the Murrays’ new home and is going to go, “anywhere and everywhere pretty much,” says Hamish. “Tonga will be the first decent leg, next season. We will spend summer up and down the coast.”

He’s keeping the crab claw rig. The traditional Melanesian/Polynesian rig is reckoned the most efficient that can be made out of a mast, two poles and a piece of flat cloth, and it is the only rig that uses variable geometry to get the best performance on all courses. The crab claw sail delivers superior performance to a Bermuda mainsail right from close-hauled, with its superiority increasing as the boat bears away. On reaching with the heading angle 90 degrees, the crab claw rig delivers about 90 per cent more driving power than the Bermuda rig. The crab claw has amazing power on offwind courses, without the need for auxiliary headsails. It means cruising sailors need no longer choose between power and ease of handling. The crab claw rig doesn’t stall as the Bermuda rig does. It has a low centre of effort, which is adjustable. The rig may be tilted straight up in light air to reach for the better breeze aloft, or in a fresh breeze it can be angled down, keeping the CE as low as possible.