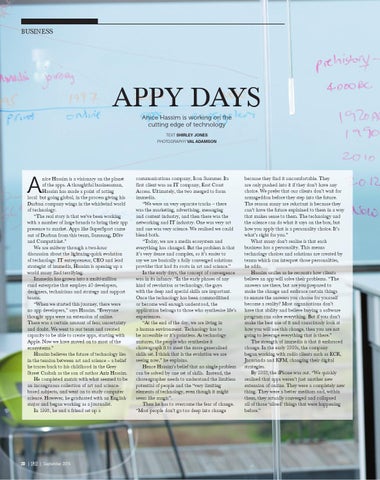 nice Hassim is a visionary on the planet of the apps. A thoughtful businessman, Hassim has made a point of acting local but going global, in the process giving his Durban company wings in the whirlwind world of technology. “The real story is that we’ve been working with a number of large brands to bring their app presence to market. Apps like SuperSport came out of Durban from this team, Samsung, DStv and Computicket.” We are midway through a two-hour discussion about the lightning-quick evolution of technology. IT entrepreneur, CEO and lead strategist of immedia, Hassim is opening up a world many find terrifying. Immedia has grown into a multi-million rand enterprise that employs 40 developers, designers, technicians and strategy and support teams. “When we started this journey, there were no app developers,” says Hassim. “Everyone thought apps were an extension of online. There was a certain amount of fear, uncertainty and doubt. We went to our team and created capacity to be able to create apps, starting with Apple. Now we have moved on to most of the ecosystems.” Hassim believes the future of technology lies in the tension between art and science – a belief he traces back to his childhood in the Grey Street Casbah as the son of author Aziz Hassim. He completed matric with what seemed to be an incongruous collection of art and sciencebased subjects, and went on to study computer science. However, he graduated with an English major and began working as a journalist. In 1995, he and a friend set up a

communications company, Icon Summer. Its first client was an IT company, East Coast Access. Ultimately, the two merged to form immedia. “We were on very separate tracks – there was the marketing, advertising, messaging and content industry, and then there was the networking and IT industry. One was very art and one was very science. We realised we could blend both. “Today, we are a media ecosystem and everything has changed. But the problem is that it’s very dense and complex, so it’s easier to say we are basically a fully converged solutions provider that had its roots in art and science.” In the early days, the concept of convergence was in its infancy. “In the early phases of any kind of revolution or technology, the guys with the deep and special skills are important. Once the technology has been commoditised or become well enough understood, the application belongs to those who synthesise life’s experiences. “At the end of the day, we are living in a human environment. Technology has to be accessible or it’s pointless. As technology matures, the people who synthesise it choreograph it to meet the more generalised skills set. I think that is the evolution we are seeing now,” he explains. Hence Hassim’s belief that no single problem can be solved by one set of skills. Instead, the choreographer needs to understand the limitless potential of people and the “very limiting elements of technology, even though it might seem like magic”. Then he has to overcome the fear of change. “Most people don’t go too deep into change

because they find it uncomfortable. They are only pushed into it if they don’t have any choice. We prefer that our clients don’t wait for armageddon before they step into the future. The reason many are reluctant is because they can’t have the future explained to them in a way that makes sense to them. The technology and the science can do what it says on the box, but how you apply that is a personality choice. It’s what’s right for you.” What many don’t realise is that each business has a personality. This means technology choices and solutions are created by teams which can interpret those personalities, he adds. Hassim smiles as he recounts how clients believe an app will solve their problems. “The answers are there, but are you prepared to make the change and embrace certain things to ensure the answers you choose for yourself become a reality? Most organisations don’t have that ability and believe buying a software program can solve everything. But if you don’t make the best use of it and consciously look at how you will use this change, then you are not going to leverage everything that is there.” The strength of immedia is that it embraced change. In the early 2000s, the company began working with radio clients such as ECR, Jacaranda and KFM, changing their digital strategies. By 2007, the iPhone was out. “We quickly realised that apps weren’t just another new extension of online. They were a completely new thing. They were a better medium and, within them, they actually converged and collapsed all of those ‘siloed’ things that were happening before.”

SPICE magazine, the monthly KZN business/lifestyle publication focuses on success and accomplishment in the province, as well as inspirational features on entrepreneurs and others at the top of their game in KZN. 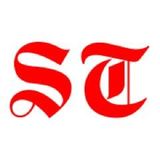