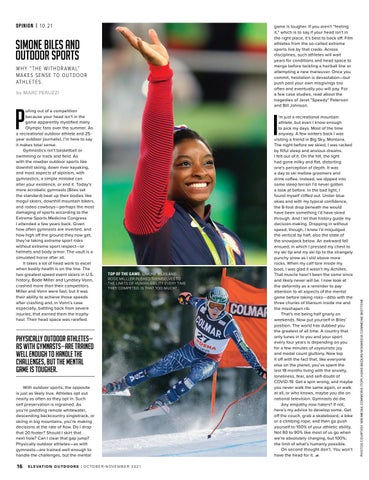 game is tougher. If you aren’t “feeling it,” which is to say if your head isn’t in the right place, it’s best to back off. Film athletes from the so-called extreme sports live by that credo. Across disciplines, such athletes will wait years for conditions and head space to merge before tackling a hairball line or attempting a new maneuver. Once you commit, hesitation is devastation—but push past your own misgivings too often and eventually you will pay. For a few case studies, read about the tragedies of Jeret &quot;Speedy&quot; Peterson and Bill Johnson.

TOP OF THE GAME: SIMONE BILES AND BODE MILLLER PUSHED THEMSELVES TO THE LIMITS OF HUMAN ABILITY EVERY TIME THEY COMPETED. IS THAT TOO MUCH?

’m just a recreational mountain athlete, but even I know enough to pick my days. Most of the time anyway. A few winters back I was visiting a friend in Big Sky, Montana. The night before we skied, I was racked by fitful sleep and anxious dreams. I felt out of it. On the hill, the light had gone milky and flat, distorting one’s perception of depth. It was a day to ski mellow groomers and drink coffee. Instead, we dipped into some steep terrain I’d never gotten a look at before. In the bad light, I found myself cliffed out. Under blue skies and with my typical confidence, the 8-foot drop beneath me would have been something I’d have skied through. And I let that history guide my decision-making. Dropping in without speed, though, I knew I’d misjudged the vertical by half, also the state of the snowpack below. An awkward fall ensued, in which I pressed my chest to my ski tip and my ski tip to the strangely punchy snow as I slid above more rocks. When my calf tore inside my boot, I was glad it wasn’t my Achilles. That muscle hasn’t been the same since and likely never will be. I now look at the deformity as a reminder to pay attention to all aspects of the mental game before taking risks—ditto with the three chunks of titanium inside me and the misshapen rib. That’s me being half gnarly on weekends. Now put yourself in Biles’ position. The world has dubbed you the greatest of all time. A country that only tunes in to you and your sport every four years is depending on you for a few minutes of voyeuristic joy and medal count gluttony. Now top it off with the fact that, like everyone else on the planet, you’ve spent the last 18 months living with the anxiety, loneliness, fear, and self-doubt of COVID-19. Get a spin wrong, and maybe you never walk the same again, or walk at all, or who knows, maybe you die on national television. Gymnasts do die. Any empathy now haters? If not, here’s my advice to develop some. Get off the couch, grab a skateboard, a bike or a climbing rope, and then go push yourself to 100% of your athletic ability. Not 80 to 90% like most of us go when we’re absolutely charging, but 100%; the limit of what’s humanly possible. On second thought don’t. You won’t have the head for it.

ulling out of a competition because your head isn’t in the game apparently mystified many Olympic fans over the summer. As a recreational outdoor athlete and 25year outdoor journalist, I’m here to say it makes total sense. Gymnastics isn’t basketball or swimming or track and field. As with the rowdier outdoor sports like downhill skiing, down river kayaking, and most aspects of alpinism, with gymnastics, a simple mistake can alter your existence, or end it. Today’s more acrobatic gymnasts (Biles set the standard) beat up their bodies like mogul skiers, downhill mountain bikers, and rodeo cowboys—perhaps the most damaging of sports according to the Extreme Sports Medicine Congress I attended a few years back. Given how often gymnasts are inverted, and how high off the ground they now get, they’re taking extreme sport risks without extreme sport respect—or helmets and body armor. The vault is a simulated horse after all. It takes a lot of head work to excel when bodily health is on the line. The two greatest speed event skiers in U.S. history, Bode Miller and Lyndsey Vonn, crashed more than their competitors. Miller and Vonn were fast, but it was their ability to achieve those speeds after crashing and, in Vonn’s case especially, battling back from severe injuries, that earned them the trophy haul. Their head space was rarefied. 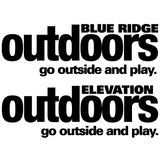 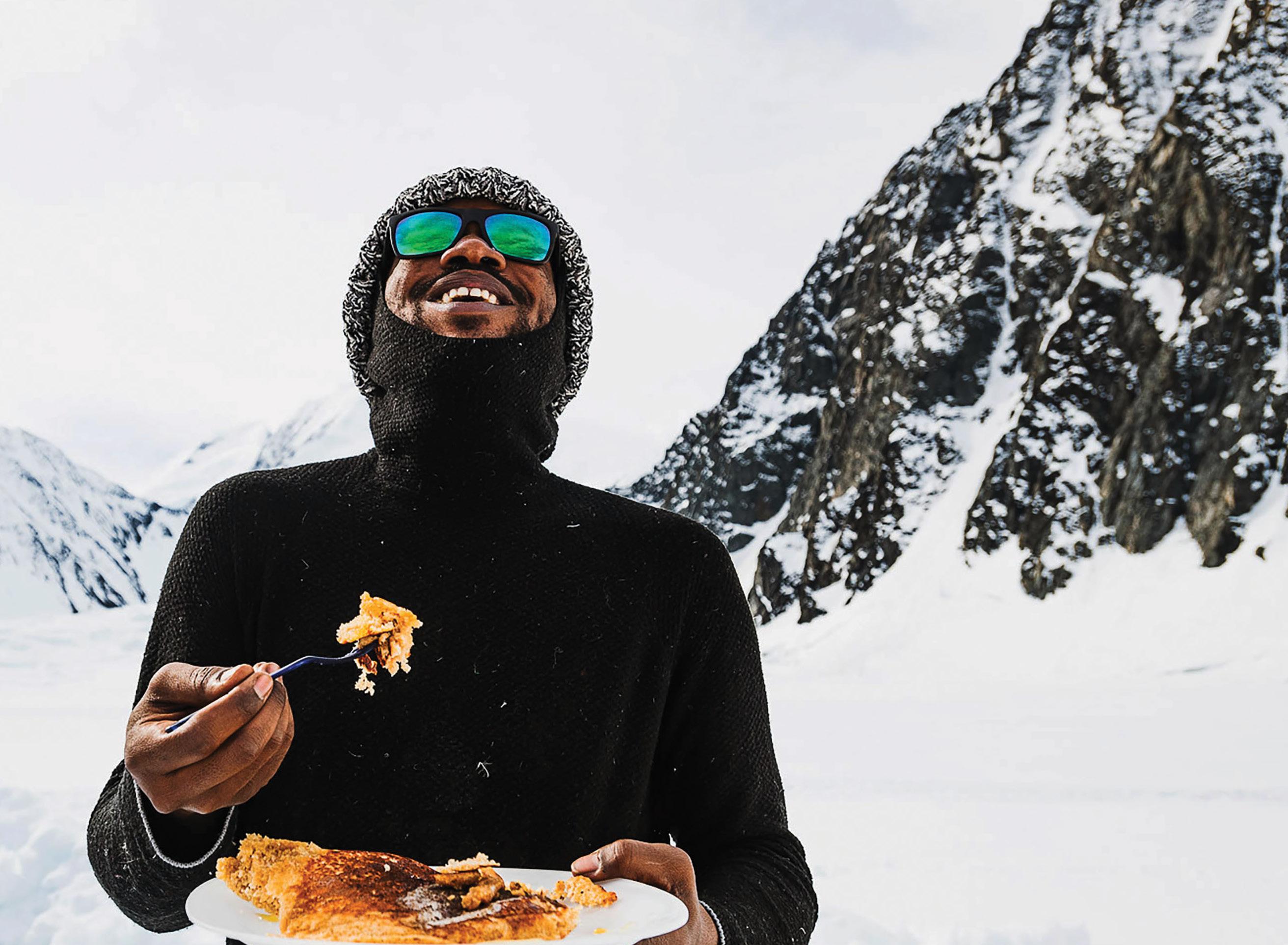 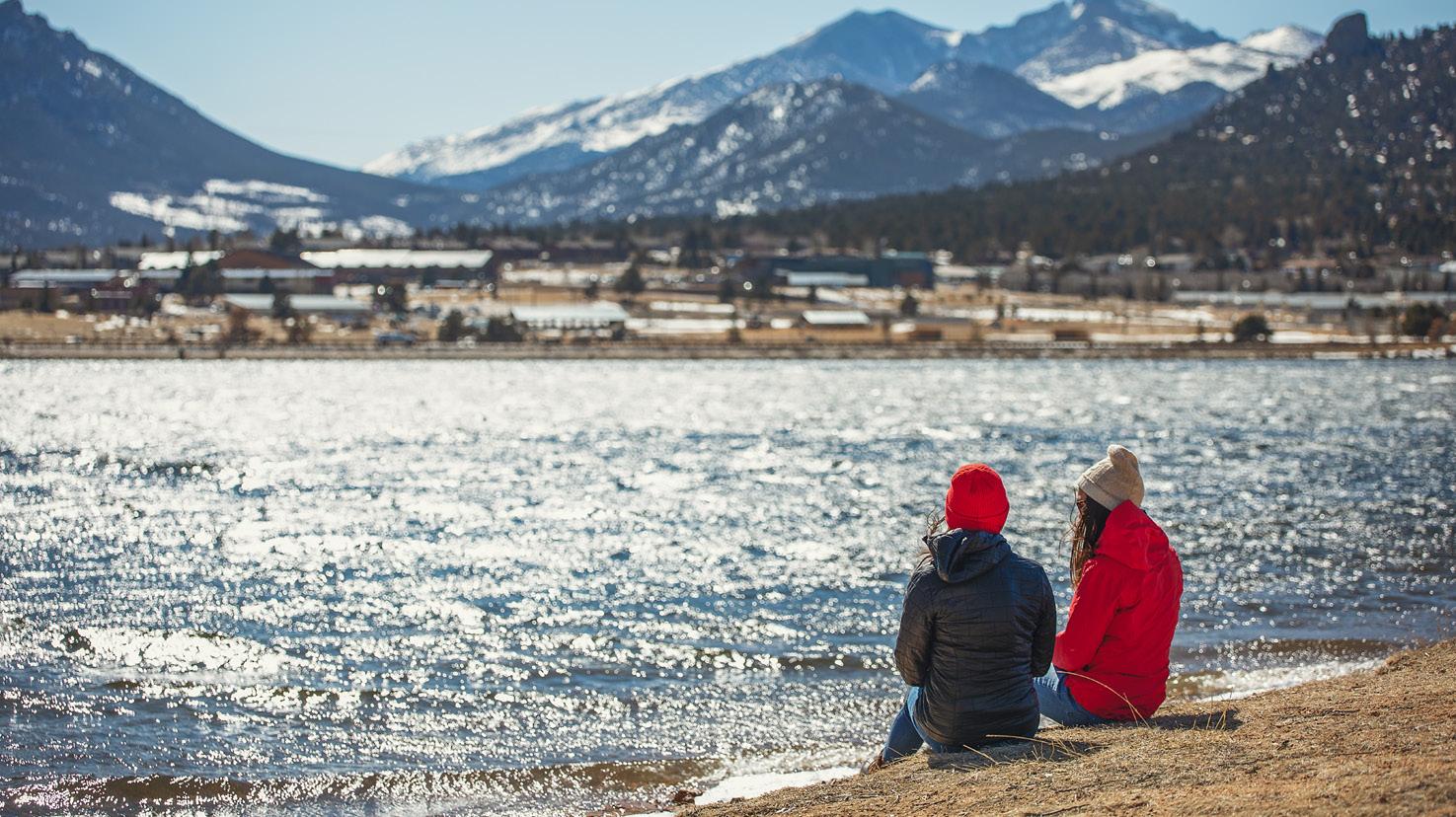 Our annual special section delivers all the details you need when it comes to beta, lessons, lodging, pandemic precautions, and deals at some of our favorite destinations in the Rocky Mountain West.