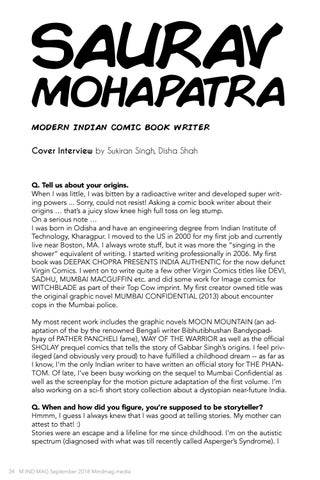 Q. Tell us about your origins. When I was little, I was bitten by a radioactive writer and developed super writing powers ... Sorry, could not resist! Asking a comic book writer about their origins … that’s a juicy slow knee high full toss on leg stump. On a serious note … I was born in Odisha and have an engineering degree from Indian Institute of Technology, Kharagpur. I moved to the US in 2000 for my first job and currently live near Boston, MA. I always wrote stuff, but it was more the “singing in the shower” equivalent of writing. I started writing professionally in 2006. My first book was DEEPAK CHOPRA PRESENTS INDIA AUTHENTIC for the now defunct Virgin Comics. I went on to write quite a few other Virgin Comics titles like DEVI, SADHU, MUMBAI MACGUFFIN etc. and did some work for Image comics for WITCHBLADE as part of their Top Cow imprint. My first creator owned title was the original graphic novel MUMBAI CONFIDENTIAL (2013) about encounter cops in the Mumbai police. My most recent work includes the graphic novels MOON MOUNTAIN (an adaptation of the by the renowned Bengali writer Bibhutibhushan Bandyopadhyay of PATHER PANCHELI fame), WAY OF THE WARRIOR as well as the official SHOLAY prequel comics that tells the story of Gabbar Singh’s origins. I feel privileged (and obviously very proud) to have fulfilled a childhood dream -- as far as I know, I’m the only Indian writer to have written an official story for THE PHANTOM. Of late, I’ve been busy working on the sequel to Mumbai Confidential as well as the screenplay for the motion picture adaptation of the first volume. I’m also working on a sci-fi short story collection about a dystopian near-future India. Q. When and how did you figure, you’re supposed to be storyteller? Hmmm, I guess I always knew that I was good at telling stories. My mother can attest to that! :) Stories were an escape and a lifeline for me since childhood. I’m on the autistic spectrum (diagnosed with what was till recently called Asperger’s Syndrome). I 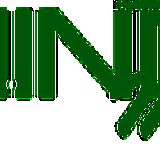