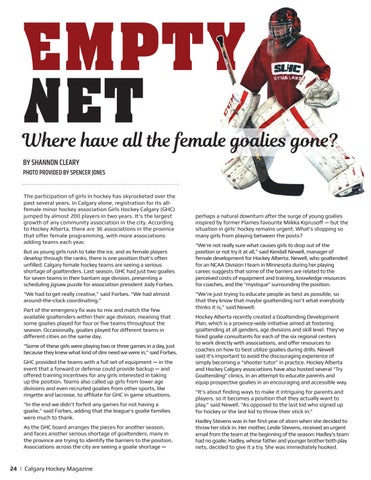 Where have all the female goalies gone? BY SHANNON CLEARY PHOTO PROVIDED BY SPENCER JONES The participation of girls in hockey has skyrocketed over the past several years. In Calgary alone, registration for its allfemale minor hockey association Girls Hockey Calgary (GHC) jumped by almost 200 players in two years. It’s the largest growth of any community association in the city. According to Hockey Alberta, there are 36 associations in the province that offer female programming, with more associations adding teams each year. But as young girls rush to take the ice, and as female players develop through the ranks, there is one position that’s often unfilled. Calgary female hockey teams are seeing a serious shortage of goaltenders. Last season, GHC had just two goalies for seven teams in their bantam age division, presenting a scheduling jigsaw puzzle for association president Jody Forbes. “We had to get really creative,” said Forbes. “We had almost around-the-clock coordinating.” Part of the emergency fix was to mix and match the few available goaltenders within their age division, meaning that some goalies played for four or five teams throughout the season. Occasionally, goalies played for different teams in different cities on the same day. “Some of these girls were playing two or three games in a day, just because they knew what kind of dire need we were in,” said Forbes. GHC provided the teams with a full set of equipment — in the event that a forward or defense could provide backup — and offered training incentives for any girls interested in taking up the position. Teams also called up girls from lower age divisions and even recruited goalies from other sports, like ringette and lacrosse, to affiliate for GHC in game situations. “In the end we didn’t forfeit any games for not having a goalie,” said Forbes, adding that the league’s goalie families were much to thank. As the GHC board arranges the pieces for another season, and faces another serious shortage of goaltenders, many in the province are trying to identify the barriers to the position. Associations across the city are seeing a goalie shortage —

perhaps a natural downturn after the surge of young goalies inspired by former Flames favourite Miikka Kiprusoff — but the situation in girls’ hockey remains urgent. What’s stopping so many girls from playing between the posts? “We’re not really sure what causes girls to drop out of the position or not try it at all,” said Kendall Newell, manager of female development for Hockey Alberta. Newell, who goaltended for an NCAA Division I team in Minnesota during her playing career, suggests that some of the barriers are related to the perceived costs of equipment and training, knowledge resources for coaches, and the “mystique” surrounding the position. “We’re just trying to educate people as best as possible, so that they know that maybe goaltending isn’t what everybody thinks it is,” said Newell. Hockey Alberta recently created a Goaltending Development Plan, which is a province-wide initiative aimed at fostering goaltending at all genders, age divisions and skill level. They’ve hired goalie consultants for each of the six regional centers to work directly with associations, and offer resources to coaches on how to best utilize goalies during drills. Newell said it’s important to avoid the discouraging experience of simply becoming a “shooter tutor” in practice. Hockey Alberta and Hockey Calgary associations have also hosted several “Try Goaltending” clinics, in an attempt to educate parents and equip prospective goalies in an encouraging and accessible way. “It’s about finding ways to make it intriguing for parents and players, so it becomes a position that they actually want to play,” said Newell. “As opposed to the last kid who signed up for hockey or the last kid to throw their stick in.” Hadley Stevens was in her first year of atom when she decided to throw her stick in. Her mother, Leslie Stevens, received an urgent email from the team at the beginning of the season: Hadley’s team had no goalie. Hadley, whose father and younger brother both play nets, decided to give it a try. She was immediately hooked. 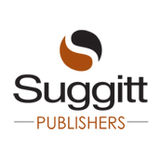