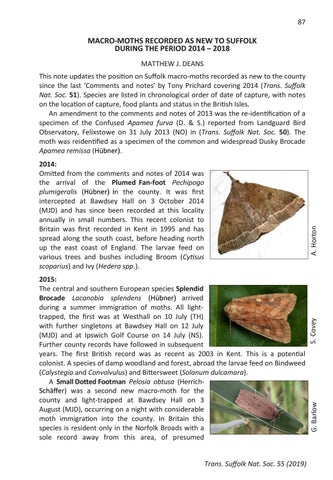 MACRO-MOTHS RECORDED AS NEW TO SUFFOLK DURING THE PERIOD 2014 – 2018 MATTHEW J. DEANS This note updates the position on Suffolk macro-moths recorded as new to the county since the last ‘Comments and notes’ by Tony Prichard covering 2014 (Trans. Suffolk Nat. Soc. 51). Species are listed in chronological order of date of capture, with notes on the location of capture, food plants and status in the British Isles. An amendment to the comments and notes of 2013 was the re-identification of a specimen of the Confused Apamea furva (D. & S.) reported from Landguard Bird Observatory, Felixstowe on 31 July 2013 (NO) in (Trans. Suffolk Nat. Soc. 50). The moth was reidentified as a specimen of the common and widespread Dusky Brocade Apamea remissa (Hübner).

2015: The central and southern European species Splendid Brocade Lacanobia splendens (Hübner) arrived during a summer immigration of moths. All lighttrapped, the first was at Westhall on 10 July (TH) with further singletons at Bawdsey Hall on 12 July (MJD) and at Ipswich Golf Course on 14 July (NS). Further county records have followed in subsequent years. The first British record was as recent as 2003 in Kent. This is a potential colonist. A species of damp woodland and forest, abroad the larvae feed on Bindweed (Calystegia and Convolvulus) and Bittersweet (Solanum dulcamara). A Small Dotted Footman Pelosia obtusa (HerrichSchäffer) was a second new macro-moth for the county and light-trapped at Bawdsey Hall on 3 August (MJD), occurring on a night with considerable moth immigration into the county. In Britain this species is resident only in the Norfolk Broads with a sole record away from this area, of presumed

2014: Omitted from the comments and notes of 2014 was the arrival of the Plumed Fan-foot Pechipogo plumigeralis (Hübner) in the county. It was first intercepted at Bawdsey Hall on 3 October 2014 (MJD) and has since been recorded at this locality annually in small numbers. This recent colonist to Britain was first recorded in Kent in 1995 and has spread along the south coast, before heading north up the east coast of England. The larvae feed on various trees and bushes including Broom (Cytisus scoparius) and Ivy (Hedera spp.).

2017: A single new species of macro-moth was identified new to Suffolk during 2017. A specimen of Amphipyra effusa (Boisduval) light-trapped at Landguard Bird Observatory, Felixstowe on 17 June (NO) was also new to Britain and given the name of Landguard Ochre. Known from southern Trans. Suffolk Nat. Soc. 55 (2019)

2016: Three species of macro-moth arrived new to the county â&#x20AC;&#x201C; all remarkably from Bawdsey Hall and all during the second half of July. The Sub -angled Wave Scopula nigropunctata (Hufnagel) was lighttrapped on 19 July (MJD). A further specimen was taken at the same site on 21 July. In the British Isles this species is resident only in Kent and Sussex with occasional immigrants arriving elsewhere. The food plants are unknown in the wild. The second new macro this year was Waved Carpet Hydrelia sylvata (D. & S.) light-trapped at Bawdsey Hall on 24 July (MJD). This species is scarcely distributed in England and Wales. This moth was most likely a wanderer from our nearest colony in Kent. The larvae feed on the young leaves of Alder (Alnus glutinosa), Birch (Betula) and Sallow (Salix). A Bloxworth Snout Hypena obsitalis (HĂźbner) was lighttrapped at Bawdsey Hall on 27 July (MJD). The nearest colony of H. obsitalis appears to be in Sussex, although there are recent records of presumed immigrants from Kent and Essex. The food plants are Pellitory-of-the-wall (Parietaria judaica). The first British record was from Bloxworth, Dorset in 1884.

immigrant origin, on Isle of Grain, Kent in 2006. Also at Bawdsey Hall on 3 August was a continental example of the Speckled Footman Coscinia cribraria (Linn.) with white forewings of the form arenaria (Lempke) - itself a spectacular record, the third in the county and first since one taken by Mr. Alfred Waller at Waldringfield in 1973. The capture of the cribraria on the same night as the obtusa lend weight to the latter being of immigrant origin too. The larvae is thought to feed on algae, probably on fallen or dead branches. A Paignton Snout Hypena obesalis (Treit.) light-trapped in Dunwich Forest on 14 September by a visiting recorder (DCGB) was the third new macro-moth for the county this year. An extremely rare immigrant to the British Isles, this was only the sixth to be recorded, since the first at Paignton, Devon, in 1908. Although most unlikely to colonise Britain, of interest, abroad the larvae feed on Nettle (Urtica dioica).

2018: The 2018 season produced two new species of macro-moth to the county â&#x20AC;&#x201C; the Alchymist Catephia alchymista (D. & S.) light-trapped at Corton on the night of 12 May (CS) was a most surprising addition to our fauna. With favourable winds from the nearcontinent, the occurrence of this very rare immigrant to the British Isles coincided with a record of the rare Dusky Hook-tip Drepana curvatula (Borkhausen) at nearby Kessingland on the same night (AE). Abroad, the larvae feed on Oak (Quercus spp.). At the end of the recording season the Oak Rustic Dryobota labecula (Esper) arrived more or less on cue, as this species has been spreading along the south coast and up the east coast of England. The first record was taken at light at Hen Reedbeds, Reydon on 4 November (JE); with three further records at Bawdsey Hall between 7, 10 and 11 November (MJD).

Europe, it is unsure if the moth was an immigrant, or more likely, an adventive species imported with shipping into nearby Felixstowe docks. Abroad, the larvae feed on a variety of plants including Carrot sp. (Ferula), Poplar sp. (Populus), Heather sp. (Erica), Broom (Cytisus) and Rock rose (Cistus).