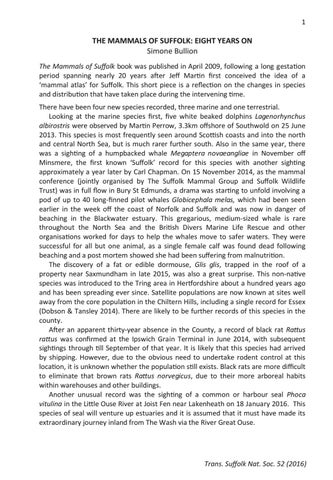 THE MAMMALS OF SUFFOLK: EIGHT YEARS ON Simone Bullion The Mammals of Suffolk book was published in April 2009, following a long gestation period spanning nearly 20 years after Jeff Martin first conceived the idea of a ‘mammal atlas’ for Suffolk. This short piece is a reflection on the changes in species and distribution that have taken place during the intervening time. There have been four new species recorded, three marine and one terrestrial. Looking at the marine species first, five white beaked dolphins Lagenorhynchus albirostris were observed by Martin Perrow, 3.3km offshore of Southwold on 25 June 2013. This species is most frequently seen around Scottish coasts and into the north and central North Sea, but is much rarer further south. Also in the same year, there was a sighting of a humpbacked whale Megaptera novaeangliae in November off Minsmere, the first known ‘Suffolk’ record for this species with another sighting approximately a year later by Carl Chapman. On 15 November 2014, as the mammal conference (jointly organised by The Suffolk Mammal Group and Suffolk Wildlife Trust) was in full flow in Bury St Edmunds, a drama was starting to unfold involving a pod of up to 40 long-finned pilot whales Globicephala melas, which had been seen earlier in the week off the coast of Norfolk and Suffolk and was now in danger of beaching in the Blackwater estuary. This gregarious, medium-sized whale is rare throughout the North Sea and the British Divers Marine Life Rescue and other organisations worked for days to help the whales move to safer waters. They were successful for all but one animal, as a single female calf was found dead following beaching and a post mortem showed she had been suffering from malnutrition. The discovery of a fat or edible dormouse, Glis glis, trapped in the roof of a property near Saxmundham in late 2015, was also a great surprise. This non-native species was introduced to the Tring area in Hertfordshire about a hundred years ago and has been spreading ever since. Satellite populations are now known at sites well away from the core population in the Chiltern Hills, including a single record for Essex (Dobson & Tansley 2014). There are likely to be further records of this species in the county. After an apparent thirty-year absence in the County, a record of black rat Rattus rattus was confirmed at the Ipswich Grain Terminal in June 2014, with subsequent sightings through till September of that year. It is likely that this species had arrived by shipping. However, due to the obvious need to undertake rodent control at this location, it is unknown whether the population still exists. Black rats are more difficult to eliminate that brown rats Rattus norvegicus, due to their more arboreal habits within warehouses and other buildings. Another unusual record was the sighting of a common or harbour seal Phoca vitulina in the Little Ouse River at Joist Fen near Lakenheath on 18 January 2016. This species of seal will venture up estuaries and it is assumed that it must have made its extraordinary journey inland from The Wash via the River Great Ouse.

At the time of writing The Mammals of Suffolk, a single polecat Mustela putorius had been recorded in 2004 at Red Lodge, with no further confirmed records for some years. Thankfully the recovery of the species has increased significantly, with colonisation particularly from the south across the River Stour. There are now numerous records being sent in each year across the county, many of which are road casualties for which this species is particularly prone. Cross-breeding with feral ferrets has resulted in a high degree of hybridisation, which manifests itself in features such as a less pronounced facial mask, or white areas on the body. However, Suffolk is not in a ‘polecat purity zone’ so in reality, this is of lesser importance as these animals are still functionally a polecat! For the remaining species, ongoing surveys have continued to improve our understanding of the distribution of several species. The work of the Suffolk Bat group has significantly increased the number of records across the county, with the barbastelle bat Barbastella barbastellus being the most notable. The distribution map published in The Mammals of Suffolk displays numerous empty 10km squares in the centre and north-east of Suffolk. However, the situation now is that many of these squares have at least one record, indicating this species is more widespread across the county than previously known. Hazel dormouse Muscardinus arvellanarius has benefited from consecutive years of surveys undertaken by the Author and Alison Looser through several Suffolk Wildlife Trust projects. In addition, new records have been submitted by others, as part of the requirement for their Natural England survey licence. In 2015, this resulted in the discovery of a new population north-east of Haverhill in a previously unknown area. Similarly, the finding of a dormouse nest north of Ipswich means that this area also merits further surveys. In 2014 and 2015, as part of a ‘citizen science’ project, Suffolk Wildlife Trust promoted the on-line recording of hedgehog Erinaceus europaeus sightings to investigate whether people were still seeing this declining species. Over 8000 records were submitted in the first year alone, of which approximately 1300 were road casualties, thus providing an up-to date and invaluable picture of the current whereabouts of this species. Although the distribution was county-wide, it appeared that it was our towns where the most sightings took place, although this is difficult to quantify as there are more people looking in such locations! In particular, this data provided a strong evidence base that hedgehogs were still widespread across Ipswich and was used to secure funding from British Hedgehog Preservation Society and Heritage Lottery Fund for an Ipswich Hedgehog Project Officer in September 2016, the first for Suffolk and only one of four such posts in the UK! References Bullion, S. (2009). The Mammals of Suffolk. Suffolk Wildlife Trust and Suffolk Naturalists’ Society. Dobson, J. & Tansley, D. (2014). Mammals of Essex. Essex Field Club.

The Mammals of Suffolk: eight years on

The Mammals of Suffolk: eight years on