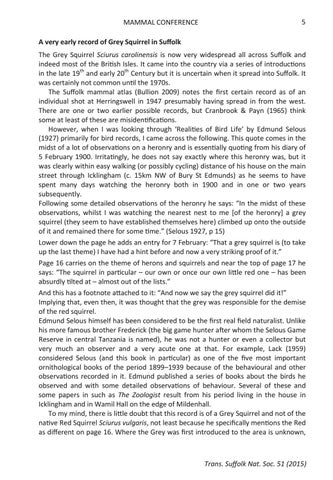 A very early record of Grey Squirrel in Suffolk The Grey Squirrel Sciurus carolinensis is now very widespread all across Suffolk and indeed most of the British Isles. It came into the country via a series of introductions in the late 19th and early 20th Century but it is uncertain when it spread into Suffolk. It was certainly not common until the 1970s. The Suffolk mammal atlas (Bullion 2009) notes the first certain record as of an individual shot at Herringswell in 1947 presumably having spread in from the west. There are one or two earlier possible records, but Cranbrook & Payn (1965) think some at least of these are misidentifications. However, when I was looking through ‘Realities of Bird Life’ by Edmund Selous (1927) primarily for bird records, I came across the following. This quote comes in the midst of a lot of observations on a heronry and is essentially quoting from his diary of 5 February 1900. Irritatingly, he does not say exactly where this heronry was, but it was clearly within easy walking (or possibly cycling) distance of his house on the main street through Icklingham (c. 15km NW of Bury St Edmunds) as he seems to have spent many days watching the heronry both in 1900 and in one or two years subsequently. Following some detailed observations of the heronry he says: “In the midst of these observations, whilst I was watching the nearest nest to me [of the heronry] a grey squirrel (they seem to have established themselves here) climbed up onto the outside of it and remained there for some time.” (Selous 1927, p 15) Lower down the page he adds an entry for 7 February: “That a grey squirrel is (to take up the last theme) I have had a hint before and now a very striking proof of it.” Page 16 carries on the theme of herons and squirrels and near the top of page 17 he says: “The squirrel in particular – our own or once our own little red one – has been absurdly tilted at – almost out of the lists.” And this has a footnote attached to it: “And now we say the grey squirrel did it!” Implying that, even then, it was thought that the grey was responsible for the demise of the red squirrel. Edmund Selous himself has been considered to be the first real field naturalist. Unlike his more famous brother Frederick (the big game hunter after whom the Selous Game Reserve in central Tanzania is named), he was not a hunter or even a collector but very much an observer and a very acute one at that. For example, Lack (1959) considered Selous (and this book in particular) as one of the five most important ornithological books of the period 1899–1939 because of the behavioural and other observations recorded in it. Edmund published a series of books about the birds he observed and with some detailed observations of behaviour. Several of these and some papers in such as The Zoologist result from his period living in the house in Icklingham and in Wamil Hall on the edge of Mildenhall. To my mind, there is little doubt that this record is of a Grey Squirrel and not of the native Red Squirrel Sciurus vulgaris, not least because he specifically mentions the Red as different on page 16. Where the Grey was first introduced to the area is unknown,

but 1900 is certainly fairly early in the sequence of introductions of that species to Britain. Harris & Yalden (2008) note there were 30 or more introductions around the turn of the 19th/20th Century, but do not say where these were. Also evidently this particular introduction died out as there are no other records from the area until very much later. I thank Simone Bullion for comments on a draft of this note. References Bullion, S. (2009). The Mammal Atlas of Suffolk. Suffolk Naturalists’ Society, Ipswich. Cranbrook, The Earl of & Payn, W. H. (1965). Squirrel survey 1963-1964. Trans. Suffolk Nat. Soc. 13: 82–85. Harris, S. & Yalden, D. W. (2008). Mammals of the British Isles: Handbook, 4th edition. The Mammal Society, Southampton. Lack, D. (1959). Some British pioneers in ornithological research, 1859–1939. Ibis 101: 71–81. Selous, E. (1927). Realities of Bird Life. Being extracts from the diaries of a life-loving naturalist. Constable & Co., London. Peter Lack 11 Holden Road, Lackford, Bury St Edmunds IP28 6HZ

A very early record of Grey Squirrel in Suffolk

A very early record of Grey Squirrel in Suffolk