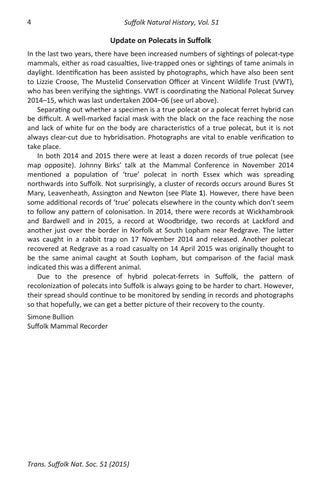 Update on Polecats in Suffolk In the last two years, there have been increased numbers of sightings of polecat-type mammals, either as road casualties, live-trapped ones or sightings of tame animals in daylight. Identification has been assisted by photographs, which have also been sent to Lizzie Croose, The Mustelid Conservation Officer at Vincent Wildlife Trust (VWT), who has been verifying the sightings. VWT is coordinating the National Polecat Survey 2014–15, which was last undertaken 2004–06 (see url above). Separating out whether a specimen is a true polecat or a polecat ferret hybrid can be difficult. A well-marked facial mask with the black on the face reaching the nose and lack of white fur on the body are characteristics of a true polecat, but it is not always clear-cut due to hybridisation. Photographs are vital to enable verification to take place. In both 2014 and 2015 there were at least a dozen records of true polecat (see map opposite). Johnny Birks’ talk at the Mammal Conference in November 2014 mentioned a population of ‘true’ polecat in north Essex which was spreading northwards into Suffolk. Not surprisingly, a cluster of records occurs around Bures St Mary, Leavenheath, Assington and Newton (see Plate 1). However, there have been some additional records of ‘true’ polecats elsewhere in the county which don’t seem to follow any pattern of colonisation. In 2014, there were records at Wickhambrook and Bardwell and in 2015, a record at Woodbridge, two records at Lackford and another just over the border in Norfolk at South Lopham near Redgrave. The latter was caught in a rabbit trap on 17 November 2014 and released. Another polecat recovered at Redgrave as a road casualty on 14 April 2015 was originally thought to be the same animal caught at South Lopham, but comparison of the facial mask indicated this was a different animal. Due to the presence of hybrid polecat-ferrets in Suffolk, the pattern of recolonization of polecats into Suffolk is always going to be harder to chart. However, their spread should continue to be monitored by sending in records and photographs so that hopefully, we can get a better picture of their recovery to the county. Simone Bullion Suffolk Mammal Recorder

Suffolk records of Polecat and Polecat-ferret from 2014 and 2015.

Update on Polecats in Suffolk

Update on Polecats in Suffolk