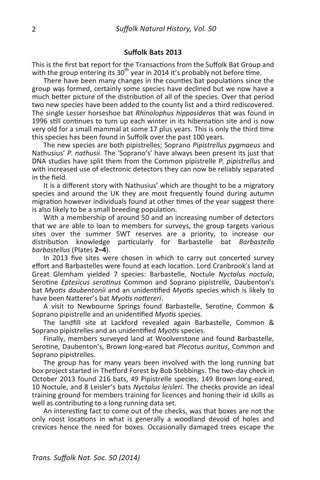 This is the first bat report for the Transactions from the Suffolk Bat Group and with the group entering its 30th year in 2014 it’s probably not before time. There have been many changes in the counties bat populations since the group was formed, certainly some species have declined but we now have a much better picture of the distribution of all of the species. Over that period two new species have been added to the county list and a third rediscovered. The single Lesser horseshoe bat Rhinolophus hipposideros that was found in 1996 still continues to turn up each winter in its hibernation site and is now very old for a small mammal at some 17 plus years. This is only the third time this species has been found in Suffolk over the past 100 years. The new species are both pipistrelles; Soprano Pipistrellus pygmaeus and Nathusius’ P. nathusii. The ‘Soprano’s’ have always been present its just that DNA studies have split them from the Common pipistrelle P. pipistrellus and with increased use of electronic detectors they can now be reliably separated in the field. It is a different story with Nathusius’ which are thought to be a migratory species and around the UK they are most frequently found during autumn migration however individuals found at other times of the year suggest there is also likely to be a small breeding population. With a membership of around 50 and an increasing number of detectors that we are able to loan to members for surveys, the group targets various sites over the summer SWT reserves are a priority, to increase our distribution knowledge particularly for Barbastelle bat Barbastella barbastellus (Plates 2–4). In 2013 five sites were chosen in which to carry out concerted survey effort and Barbastelles were found at each location. Lord Cranbrook’s land at Great Glemham yielded 7 species: Barbastelle, Noctule Nyctalus noctula, Serotine Eptesicus serotinus Common and Soprano pipistrelle, Daubenton’s bat Myotis daubentonii and an unidentified Myotis species which is likely to have been Natterer’s bat Myotis nattereri. A visit to Newbourne Springs found Barbastelle, Serotine, Common & Soprano pipistrelle and an unidentified Myotis species. The landfill site at Lackford revealed again Barbastelle, Common & Soprano pipistrelles and an unidentified Myotis species. Finally, members surveyed land at Woolverstone and found Barbastelle, Serotine, Daubenton’s, Brown long-eared bat Plecotus auritus, Common and Soprano pipistrelles. The group has for many years been involved with the long running bat box project started in Thetford Forest by Bob Stebbings. The two-day check in October 2013 found 216 bats, 49 Pipistrelle species, 149 Brown long-eared, 10 Noctule, and 8 Leisler’s bats Nyctalus leisleri. The checks provide an ideal training ground for members training for licences and honing their id skills as well as contributing to a long running data set. An interesting fact to come out of the checks, was that boxes are not the only roost locations in what is generally a woodland devoid of holes and crevices hence the need for boxes. Occasionally damaged trees escape the

Figure 1. Corsican Pine in Thetford Forest providing a natural roost site for Brown Long-eared Bats. (Photo: A. Rivett). foresterâ&#x20AC;&#x2122;s eye and one particular Corsican pine which had grown as a double leader was probably the result of deer damage at an early stage (Fig. 1). The two stems had grown parallel to each other and had formed a cavity which was found to be used by Brown long-eared bats. The bats were found in a nearby box and when released one bat flew directly to the crevice in the tree thus proving bats utilise a great many roost sites in a wood sometimes using them for only a few nights each year. If anyone is interested in getting involved with the group please contact bats@sns.org.uk. Alan Miller