Golden Accessories: a link to the outside world from the pyramid at site 4-F-71 (Fourth Cataract, SA 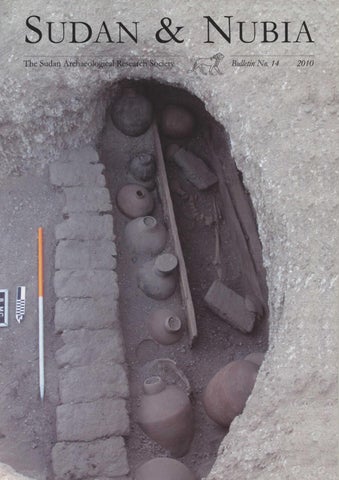 Golden Accessories: a link to the outside world from the pyramid at site 4-F-71 (Fourth Cataract, SARS Concession) Isabella Welsby Sjöström

Golden Accessories: a link to the outside world from the pyramid at site 4-F-71 (Fourth Cataract, SARS Concession) Isabella Welsby Sjöström This is a preliminary discussion only. As this article makes clear, a great deal of further research is needed: publication at this stage is undertaken in order to open discussion on a category of material which has hitherto been given little prominence, in part due to the very small and indistinct photographs of similar beads that have been published to date (Dunham 1950; 1955). Any information on the provenance of other beads of this form would be very much welcomed by the author. In January-February and again in December 2003, the granite pyramid at site 4-F-71 near the village of et-Tereif was investigated (Welsby 2003, 30; 2004). Excavation revealed that tomb robbers had not only contributed to the near total ruin of the superstructure (Plate 1), but had also removed all trace of the burial from the tomb chamber. As a result the number of finds was minimal, with only a handful of pottery sherds, a few beads and fragments of a large stone disc being recovered. Among these were four ‘cogwheel’-shaped, or ‘beaded’ disc beads, apparently of gold. The somewhat unusual appearance of the material from which they were made (cf. Figure 1, Colour plate XIII) introduced the possibility that they were not pure gold, and consequently they were brought to the British Museum for analysis. The complete range of finds will be discussed and described in detail in the forthcoming final publication of the SARS survey, but two other types of bead found in the demolition layer of the pyramid and in an ‘offering pit’, within the enclosure on the south-east side, are illustrated here (Plates 2 and 3). These hint at the rich grave goods which may once have occupied the tomb.

Plate 1. The pyramid at site 4-F-71, after cleaning and before excavation of the burial (Photo D. A. Welsby).

Only four ‘cogwheel’ beads were recovered, from three different contexts. They were found in the fill of pit 58 which lay immediately outside and to the east of the enclosure wall, in a disturbed deposit to the east of the pyramid within the enclosure, and in a similar deposit within the confines of the pyramid. They measure approximately 10mm in diameter, and are just over 1mm thick, with the diameter of the central hole c. 6mm. In each case 16 spheres of gold are attached to a multifaceted ring (Colour plates XIV and XV, with thanks to Jack Ogden for the drawing).

Plate 3. Golden faience udjat-eye bead, from the fill of a pit within the enclosure of the pyramid (photo D. A. Welsby).

surface finds collected by the local shepherds, so is not in context (Khider Adam Eisa 1999, 75, pl. 37). However, the collection as a whole has been provisionally dated to the Kushite period by Dr Khider Adam Eisa.

Only the surface of the beads was analysed, in order not to damage them, and the results of this analysis by X-ray Fluorescence (XRF), Fourier transform infrared spectroscopy (FTIR) and X-ray diffraction (XRD) revealed that the composition of the beads was approximately 81% gold, 18% silver and 1% copper. A greenish-yellow powdery substance on the surface of the beads was identified as AuCN (auriferous cyanide). This is used in modern electroforming or plating processes. (Wang and La Niece 2007). However, in view of the context they were found in and the parallels with identical beads among the grave goods from pyramids elsewhere of the Napatan period, the presence of auriferous cyanide has been interpreted as modern contamination. However, as the beads have now been returned to the Sudan National Museum in Khartoum, further analysis is at present not an option.

Tawilan, southern Jordan - a single bead almost identical to the 4-F-71 examples; from a hoard of jewellery, dated to the 10th-9th centuries BC (Ogden 1995, 75). Ogden notes that similar beards were found in a contemporary context at Fara in Grave 222. Aden Museum In the Muncherjee Collection there are also some beads that resemble those from 4-F-71 (Turner 1973, 137-8, pl. 53, nos 34 and 37). Turner’s no. 34 resembles the beads from Meroe (see above) very closely, while no. 37 appears similar in idea (inner ring of only eight beads, outer of seven) if not identical in execution to the 4-F-71 beads. The beads within this collection are also notably more numerous than any of the examples we have recovered – a total of 71 of no. 34, though only four of no. 37. Provenance and dating were unfortunately vague: of probable Qatabanian origin, they are thought to date to between the 8th or 7th century BC and the 5th or 6th century AD.

An interesting range of parallels exist for the beads, both at the relatively close royal cemeteries of Kush at el-Kurru and Nuri, as well as considerably further afield, along the White Nile, and at Tawilan in Jordan. Of course these are the sites at which the objects were recovered from the archaeological record; their place of manufacture could have been far removed. The earliest and in both senses of the word also the closest parallel can be found among the grave goods of Ku 15, (of Shabaqo, 716-701 BC) (Dunham 1950, pl. lxvii.a [193-175]) (Fig. 7) where four beads of this type were recovered during Reisner’s excavations (Colour plate XVI). Then, in chronological order, with varying degrees of similitude, we have from Nuri:

Not as close parallels, but bearing a superficial similarity, are Hellenistic gold appliqués found, for example, at Mylasa, (modern Milas) in south-western Turkey (Kızıl 2002, 36, pl. 30). An indirect parallel may also be found among the jewellery discovered within the ‘quadrangle’ at Halikarnassos, dating to the early Hellenistic period: ‘Three flat rings, each embossed with 12 dots. Around the inner and outer edge raised rim. Composed of two sheets of gold, the lower one not having the raised rim. The rings show no traces of attachment. Diam. c. 11 mm. Mus. No. 6356.’ (Jeppesen 2000, 124, 131 no. 1). Possibly the Kushite beads are the ancestors of these, that have evolved to a more delicate form although evidence to support the considerable temporal and chronological gap between the early Kushite and Hellensitic examples is at present not available. Hellenistic appliqués are punctured by tiny holes that allow them to be stitched to textile, while those of the type from 4-F-71 would have had to be attached to, for example, a textile, presumably by sewing them on by wrapping the thread around them. Certainly the beads found associated with the royal burials at el-Kurru and Nuri were found together with gold leaf flower ‘buttons’ and other items that could also have been used in the form of appliqués, stitched onto clothing or other textile items. These, in turn, are common in the Hellenistic world. The wide diameter of the hole would suggest that the cogwheel beads would have been better suited as appliqués rather than as spacers in a necklace. All of the tombs from which this type of bead come have been looted, so that in no instance have they been found in situ, either as part of a necklace or stitched to textile as appliqués. Nor do we have a complete assemblage, so that it is not known what other

Sudan &amp; Nubia beads might have been used in association with them. It is curious that so far no parallel from Egypt has been found, yet parallels are to be found in Asia Minor and the Levant. The bead in the Muncherjee Collection might suggest that contact was via the Arabian Peninsula to the Middle East, bypassing Egypt, but unfortunately the provenance of this bead is uncertain.

Despite the unexplained presence of auriferous cyanide on the surface of the beads, it is nevertheless out of the question that they could be of modern manufacture. Based on the parallels from the royal burials at el-Kurru and Nuri, they are likely to date to sometime between the late 8th and mid 4th centuries BC. The almost identical nature of the 4-F-74 beads with those from the tomb of Shabaqo (c. 701 BC) suggest that they date to the early Kushite period. The occurrence of this type of beads over a wide geographical area and the similarities with appliqués in Asia Minor suggests that there may be cultural connections that in the future will be better understood.

Thanks are due to the National Corporation for Antiquities and Museums, Sudan, for permission to conduct the fieldwork and for allowing the beads to be brought on temporary loan to the British Museum where Quanyu Wang and Susan La Niece undertook the analysis. I would like to thank Jack Ogden for the reconstruction drawings of the beads and for drawing my attention to the parallels in Jordan and Aden. The original line drawing is by Clare Thorne. The staff at the Milas Müzesi were also very helpful; the reference to the publication of the Milas appliqués was supplied by Michael Metcalfe.

Colour plate XV. Golden Accessories. Reconstruction of how the beads may have been arranged (courtesy of Jack Ogden).

Golden Accessories: a link to the outside world from the pyramid at site 4-F-71 (Fourth Cataract, SA

by I. W. Sjöström — Sudan & Nubia, No 14, published by The Sudan Archaeological Research Society, 2010