Victorian Gunboats in the 21st Century 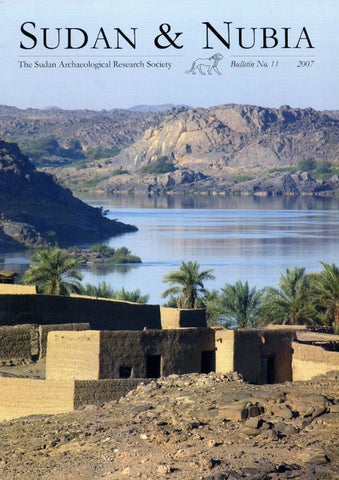 probably several Nordenfeldt or Gardner machine-guns (Grant et al, n.d.). When she reached Wilson’s force, she was loaded with a small contingent of the Royal Sussex Regiment and a number of Sudanese troops and together with her sister ship, the Tel el-Hoween (or Talahawiya), then sent chugging upstream in a vain and belated attempt to relieve Khartoum and rescue Gordon. Whether or not this tiny force would have succeeded in this desperate endeavour is open to question, but in any case it was too late as the city had already fallen and Gordon was dead. On the return journey she was wrecked near Mernat Island and although the soldiers and her crew escaped, she fell into Mahdist hands and was eventually refloated. Over eleven years later, once again with a certain reluctance, the British Government, authorised the Sirdar (Commander-in-Chief) of the Egyptian Army, General Kitchener, to invade and re-conquer the Sudan in the name of the Khedive of Egypt. Kitchener was aware that in order to achieve this, control of the river was vital and in the course of the campaign he built up a flotilla of ten gunboats; the last and most technologically advanced of these to arrive on the Nile were the twin-screw armoured gunboats, Sheikh, Sultan and Melik. Their specifications (length 145ft, beam 24½ft, draft 2ft) were more or less identical but although Sheikh and Sultan were built by Yarrow on the Clyde, Melik (Plates 1 and 2, Colour plates XLVII and XLVIII) was built by Thorneycroft at Chiswick on the Thames.1

Victorian Gunboats in the 21st Century Henry Keown-Boyd For the purposes of this article, those readers more familiar with the history of the Sudan in ancient times may wish to be reminded of the dramatic events which unfolded there during the last quarter of the 19th century. Since the 1820s, the Sudanese people had groaned under the heavy burden of Turco-Egyptian rule, when, in the 1880s, there burst onto the scene the Mahdi, Mohamed Ahmed. The Egyptians proved incapable of resisting the tidal wave of Mahdism and throughout the Sudan their army was either surrendering or retreating to the coast. The worst and most humiliating defeat occurred in November 1883 when a force of 11,000 men under Hicks Pasha, an Indian Army officer on half-pay hired by the Egyptian Government specifically to crush the Mahdi, was almost totally destroyed at Sheykan in Kordofan Province. By the end of 1884 this charismatic religious and military leader and his followers, known as Ansar, had conquered most of central and western Sudan and were laying siege to the capital, Khartoum. The British, having occupied Egypt following the defeat of the rebellious army officer, Urabi Pasha, in 1882 found themselves drawn reluctantly into the Sudan conflict and, by agreement with the Khedive, had appointed General Charles Gordon to evacuate the European community and the Egyptian garrison from Khartoum and to make whatever arrangements he could for the future governance of that country. But it was too late and in January 1885 the city fell to the Mahdi and Gordon met a “martyr’s” death, the memory of which lingers on both in Britain and the Sudan to this day. During the siege there were at Gordon’s disposal a number of paddle-driven armed river steamers, three of which, including the Bordein, he had despatched downstream in December 1884 to meet the advancing British relief force under Colonel Wilson at Gubat (Colour plate XLVI). The Bordein, built by Samuda Bros at Poplar, had been shipped to Egypt in sections and assembled at Boulak near Cairo in 1864. She had been used by the explorer/governor Sir Samuel Baker on the upper Nile and by the ill-fated Hicks expedition of 1883. She was 140ft in length, with a 26ft beam, a draft of 3½ft and made a speed of between 5 and 10 knots depending on the current. In Gordon’s time she seems to have been armed with two 9 pounders and

In 1898 all three were shipped to the Sudan in sections and bolted together on the Nile by the Royal Engineers. Most of the vessels in the flotilla were commanded by officers of the Royal Navy, but command of the Melik was given to General Gordon’s nephew, Captain William Gordon, R.E, known to his friends as “Monkey”. The crews of all the gunboats were a remarkable mixture of British, 1

SUDAN &amp; NUBIA Egyptian and Sudanese service personnel and civilians of many nationalities (Melik’s chief engineer happened to be an Englishman called Howell). Their armament included 12-pounder guns, 4-inch howitzers and Maxim machineguns. Several were equipped with search-lights and, in the case of the Melik, a cine camera was taken on board during the Battle of Omdurman, but unfortunately produced no viable footage owing to the vibration of the engines and recoil of the guns. During the battle, Melik played a crucial role in holding at bay with her tremendous fire power one of the Mahdist “Flags” (a brigade or division) which had driven back the Egyptian cavalry and Camel Corps almost to the river bank and was on the point of overwhelming them. Two days later, on 4th September, she was chosen to transport Kitchener and his staff across the river to Khartoum for the memorial service to General Gordon, which was held in the garden of his ruined palace, Melik firing a salute in his honour. Melik remained “in commission” (Plate 2) until she was leased, and eventually sold, to the Blue Nile Sailing Club as its clubhouse in 1926. During the Second World War she

In an article for the Melik Society Bulletin of March 2005 the late Dr David Dixon explained the circumstances (Dixon 2005). “In the winter of 1898”, he wrote, “…the Trustees of the British Museum, with the full co-operation of Lord Kitchener, sent E. A. Wallis Budge, Keeper of the Egyptian and Assyrian mission (sic) to the Sudan. His instructions were to examine the pyramid field at Begrawiyah, the ancient Meroe, and report on the possibilities of conducting excavations there.” On arrival at Atbara, Budge was provided with the Bordein to transport him south and he has left us a clear description of her condition. “All that remained were the main deck beams, a narrow iron bridge aft the boiler and the small iron platform at each end of her.” However, Budge “had some planks laid across the deck beams and pitched his tent on them, the centre pole was lashed to a beam and the ropes were tied to a twisted railing or anything that came handy. This done a rug and a sheepskin made a very good carpet.” This accommodation Budge found “not unsatisfactory”. The crew, he believed, were mostly former “Mahdist fanatics”. Surprisingly, perhaps, Budge reported that “most parts of the engines were in first class condition and although the cranks knocked and the shaft turned in badly worn bearings, the piston rod wanted packing and the whole iron framework lifted at each revolution, they drove the steamer against the current at the rate of a mile and a half per hour.” As for the boilers “…one felt astonished at how thin the plates had become and how many tubes leaked, but the most amazing thing was that it had no safety valve! The engineer kept heaping in logs of wood but as far as I could see he had no guide at all to tell him what the pressure in the boiler was. When he thought the engines were working too fast, he left the furnace door and went and turned a tap projecting from the top of the boiler and let out as much steam as he thought necessary…In any other country that boiler would have exploded…but in such respects Egypt and the Sudan are under the care of a special Providence.” Plus ca change…! Eventually, Bordein deposited Budge near Meroe and, as David Dixon puts it, “Her brief and peripheral contribution to Sudanese archaeology was over.” Returning to more mundane duties, she was used for transporting wood (for which she herself had a voracious appetite) until 1905 when she was laid up in the Khartoum North dockyard. However, the Sudan being an Anglo-Egyptian Condominium at the time, the Coronation of King George VI in 1937 was celebrated in Khartoum and the Bordein was refurbished and dressed overall for the occasion. Sadly, the celebrations over (Plates 3 and 4), she lapsed back into obscurity and neglect in the dockyard until 2006 when her rusting hull – all that remained of her - was chopped

was brought back into service as an oil tender, returning to her civilian role in 1945 where she remained in the water until 1989 when a particularly high flood washed her up onto the bank. This probably saved her from sinking as her bottom plates were rusting away and she was leaking badly. Meanwhile the Bordein, which had seen much service under the Mahdiya, was recovered by the Egyptian Army after the Battle of Omdurman and was soon pressed into the service of that august institution, the British Museum!

examples of Victorian marine engineering will once again be seen sailing the River Nile – this time in a more peaceful role, perhaps transporting tourists and sightseers.

up into several pieces and hauled aside to enable a slipway to be built for the Presidential yacht. In 1993 Allan Woodliffe on a business visit to Khartoum had noticed Melik in her sand berth on the premises of the Blue Nile Sailing Club (almost directly opposite the Khartoum North dock-yard where the Bordein lies) looking somewhat forlorn and “in need of care and attention” (Colour plate XLVII). On returning to England, Allan, who has a special interest in the Sudan campaigns and medals, contacted a number of people with similar enthusiasms and thus the Melik Society (see Mission Statement below) was born. After many years of endeavour and a survey of both vessels having been carried out by a leading naval architect from the firm Frazer-Nash of Bristol, in February 2007 an agreement was finally reached between the Society and the National Corporation for Antiquities and Museums of the Sudan whereby a Foundation will be formed to undertake the rebuilding, return to river worthiness and maintenance of these historic vessels. In order to achieve this, a major

MELIK SOCIETY – MISSION STATEMENT (Registered Charity no. 1049646) To bring about the restoration and maintenance of the vessels Melik and Bordein. To stimulate public interest in Anglo-Sudanese history To establish a website (www.melik.org.uk) containing a wide variety of information relating, in particular, to the Sudan Campaigns of 1883-99. To encourage goodwill and co-operation between British and Sudanese organisations involved in the preservation of the Sudan’s historical artefacts. Address:The Melik Society 202 Lambeth Road London SE1 7JW Email: secretary@melik.org.uk

fund-raising effort will be mounted in the United Kingdom, Sudan and elsewhere. However, with the cooperation of the Blue Nile Sailing Club and the River Transport Corporation (owners of the dockyard where most of the work can be done) it is expected that these two splendid

Colour plate XLVI. Victorian gunboats. The Bordein – “The Last Dispatch” by Terence Cuneo (with kind permission of the Corps of Royal Engineers).

Victorian Gunboats in the 21st Century

by H. Keown-Boyd — Sudan & Nubia, No 11, published by The Sudan Archaeological Research Society, 2007