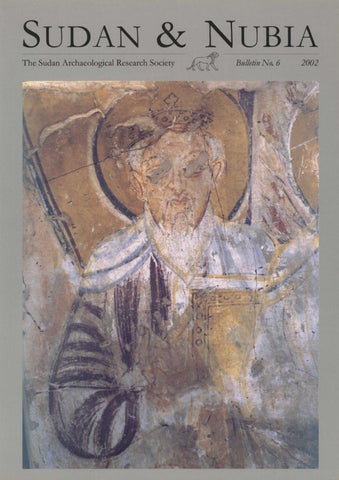 Preliminary Report on Rescue Excavations at Akad Mohamed Faroug A. Ali Introduction Akad is a district in Ed-Damer, a town in the Nile State (Figure 1), and is situated to the south of the Maspio Portland Cement factory at N. 17º38&#39; 11&quot; / E. 33º 58&#39; 51&quot;. The area of Akad was selected by the Sudatel Company as the site for a telecommunications station. Human bones and potsherds were recovered during the digging of the foundations for this station. The damage was reported to the National Corporation for Antiquities and Museums. The site was visited by myself and the antiquities officer Ali Mirghani, the damage was assessed, and a budget was submitted to Sudatel to cover the salvage and rescue activities, in accordance with Antiquities Protection Ordinance of 1999. Sudatel kindly responded and covered the expenses of two seasons of excavation. The site consists of a flat area which includes buildings of the modern settlement. It is close to a wadi and the main road to Atbara. No archaeological evidence was observed

Figure 1. Location of the site of Akad.

direction of Ali Mirghani, two Christian graves were excavated. The first grave (No. 1) had a rectangular shaft with the shallow burial chamber on the northern side. The deceased was orientated east-west and laid on its back with the head to the west. The second grave (No. 2) had similar features, but the burial chamber was deeper. The shaft of grave No. 6 was also discovered during the first phase of the work. The second excavation season (Akad II) was carried out from June 13th to 21st, 2000 by the author1 of this article and the results are described below.

during a survey of the area. Sudatel’s foundation trenches had cut through parts of grave Nos 2, 3, 4 and 6. A layer of about 5-10cm of deposit covered the grave cuts, which therefore could not be seen from the surface. The foundation trenches were surveyed as well as the surrounding areas and planned with reference to north-oriented grid systems of 2m squares. The grid and the numbering system of the graves followed that used during the Akad I activities. During the first excavation season (Akad I), under the

appeared at a depth of 95cm. This staircase led to an ovalshaped entrance (1.4 x 0.54m) sealed by a blocking wall. The bricks of the wall were slightly dislocated from their original position, which may have been the result of a reuse of the burial chamber (Plate 2). Part of a black pot-stand was found in the south-west corner of the shaft (Figure 5.3), while fragments of a red pot-stand (Figure 5.4) were discovered on the third step of the staircase. The burial chamber was filled with a hard deposit due to penetration of water into the grave. It contained two inhumations. The first was an adult, oriented east-west, laid in a contracted position on its left side, head to the east, facing south. The arms were flexed in front of the face. The second individual was buried 30cm to the north of the first body. It was laid in an extended position (east-west), head to the west and the arms were found beneath the body. The skeleton was in a very bad state of preservation. The grave goods found in situ on the eastern side of the grave, consisted of a broken pot-stand (Figure 5.1) holding a black bowl (Figure 5.2).

Thegravegoods Pot-stand (B5-14-1) Dimensions: H:20.6cm, Dia:14 and 12.7cm Burnished hand-made vessel. The interior and exterior surfaces are painted with vertical wavy lines and crescent shapes in white paint on a reddish-brown background (Figure 5.1). A similar object was found at Gabati (Site 159-2) in Tumulus No. 5. Smith has described and dated this type of ceramic to the 5th century AD (Smith 1997, 258, fig. 20a).

depth of 80cm below the surface and led to a burial chamber (Figure 2). The chamber was disturbed by the foundation trenches and the building activities associated with the construction of the station (Plate 1). It contained only some dislocated fragments of human bones and the rim of a pottery vessel.

Bowl (B5-14-2) Dimensions: H:8.6cm, Dia:11.8cm A black coarse hand-made vessel with a rounded base. It has a thin slip. The decoration consists of incised irregular crossed lines on the body (Figure 5.2).

A square shaft (1.44m), with rounded corners, appeared after the removal of a 20cm layer of earth from the surface. A later cut continued to a depth of about 60cm from the surface (Figure 3). The first step of a mud-brick staircase

Pot-stand (B4-12-1) Dimensions: H:7.3cm, Dia:12.7cm Half of a burnished hand-made vessel. The exterior is decorated with irregular horizontal wavy lines in white paint on a reddish-brown background, while the internal decoration consists of four radially arranged groups, each of two parallel rows of white painted hearts (Figure 5.4). A similar external decoration has been recorded on a pot-stand recovered from a grave in Berber (Lenoble 1991, 171). The plan of the grave and its ceramic offerings are typical of post-Meroitic burials excavated elsewhere in central Sudan.

Grave No. 5 The sloping shaft, 2.75m long by 1.5m wide and oriented approximately east-west, appeared after the removal of 10cm

Figure 4. Plan, and elevation of blocking wall, of Grave No. 5.

of the surface deposit. The red and mud bricks sealing the entrance, which was about 62cm high, appeared at a depth of 1.46m. The roof of the chamber had collapsed due to water penetration into the grave through a pit. The removal of the hard deposit within the chamber revealed that it was of irregular shape (Figure 4, Plate 3). Some pottery sherds were found at a depth of 1.2m in a rectangular pit (2.1 Ă&amp;#x2014; 0.75m), which had been cut vertically, at a later date, into the north-east side of the grave (Figure 4). Total excavation of this part of the grave has not yet been completed.

Grave No. 6 A rectangular shaft measuring 1.7 Ă&amp;#x2014; 1.1m and 1.36m deep is oriented west-east (Figure 6). The red-brick sealing of the entrance appeared on the eastern side and leads to two connected chambers. Due to penetration of water into the grave, the chambers were filled with a hard deposit. The first chamber was an oval shape and measured 3.1 x 1.95m and was 90cm high. The second chamber, which contained the burial, was rectangular with rounded corners, measuring 2.44m in length by 1.5m wide. The contracted individual was found on the eastern side, orientated north-south, laid on its right side, head to the south, facing east, with the arms folded over the chest. Perhaps as a result of water penetrating into the grave the bones became disarticulated. The grave goods were deposited near the legs and consisted of three bowls.

incised ‘X’-shaped design elements. There is a single small oval lug on the exterior (Figure 5.7). The form, decoration and surface treatment of this vessel can be paralleled among Adams’ Style DIII (element 11,6-2) (Adams 1986, 257-58). In view of the sub-structure, burial customs, and the grave goods, this grave can be dated to the Meroitic period (Adams 1986; Arkell 1949).

Conclusion No superstructures were found on the surface, probably the result of the recent human activities, some associated with the construction and use of the modern buildings scattered across the area. The archaeological results were obtained from salvage excavations, and indicate that this area was used as a cemetery, within which were several types of temporally diverse tombs.

by Mohamed Faroug A. Ali — Sudan & Nubia, No 6, published by The Sudan Archaeological Research Society, 2002