The Amri to Kirbekan Survey 1999 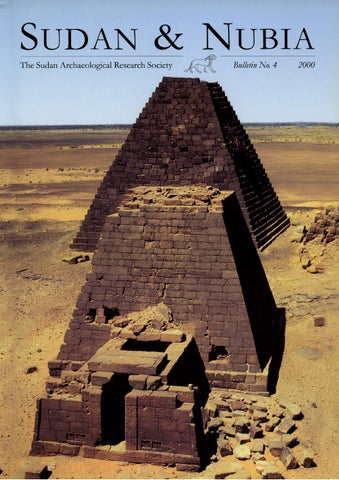 During the last winter the Society resumed its flagship project at Kawa, among other things uncovering more of the early Kushite town, including an extraordinary mud-brick building once decorated with wall-paintings showing royal and divine figures and containing the remains of large ceramic figures of the gods Bes and Beset (see Welsby below). We also responded to the international appeal for help from the National Corporation for Antiquities and Museums to document sites threatened by the planned Merowe Dam, carrying out a survey on the left bank of the Nile and on the islands between Amri and Kirkeban above the Fourth Cataract which identified well over a hundred sites of different types and periods (Welsby). Qasr Ibrim, for many years under excavation by the Egypt Exploration Society and still yielding information of first-rate importance (Rose), embodies an acute reminder of the destructive consequences of dams and of the loss to knowledge that such schemes entail. The need for rescue-work in response to various threats (environmental as well as man-made) is a thread running through much of this issue, which also includes reports on the study and conservation of the monuments at Meroe (Hinkel), excavation necessitated by road-building at Soba East (Abdel Rahman Ali Mohamed), archaeological survey in the little-known Fifth Cataract region (Yousef El-Amin and Edwards), and continuing investigation of the Mahas region at the Third Cataract (Edwards and Ali Osman), the latter an interdisciplinary project which now valuably incorporates ecological, ethnographic and linguistic components (Muhammad Jalal Hashim and Bell). We are also very pleased to include two papers on aspects of Islamic archaeology in the Sudan (Intisar Soghayroun el-Zein and Salah Omer Elsadig), hitherto a chronically neglected subject but clearly one with great potential for further research. It is an enormous pleasure to report that Professor William Y. Adams, one of the great names of modern Sudanese archaeology, has accepted our invitation to become Honorary President of SARS, in succession to the late Sir Laurence Kirwan. Professor Adams takes office in time to preside over our tenth anniversary in 2001, a year in which SARS celebrates a decade of progressive achievement and looks forward to the formidable but exciting challenges that lie ahead.

The Royal Pyramids of Meroe. Architecture, Construction and Reconstruction of a Sacred Landscape Friedrich W. Hinkel

The Domed Tombs of the Eastern Sudan Salah Omer Elsadig

The Amri to Kirbekan Survey 1999 Derek A. Welsby

Reconstructing Patterns of Settlement in the Mahas: Evidence from Language and Place-names Muhammad Jalal Hashim and Herman Bell

The Amri to Kirbekan Survey 1999

by D.A. Welsby — Sudan & Nubia, No 4, published by The Sudan Archaeological Research Society, 2000