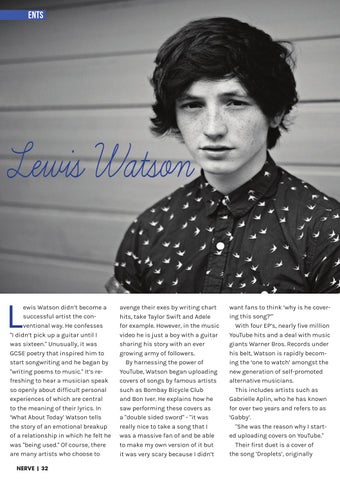 ewis Watson didn’t become a successful artist the conventional way. He confesses "I didn’t pick up a guitar until I was sixteen." Unusually, it was GCSE poetry that inspired him to start songwriting and he began by "writing poems to music." It’s refreshing to hear a musician speak so openly about difficult personal experiences of which are central to the meaning of their lyrics. In ‘What About Today’ Watson tells the story of an emotional breakup of a relationship in which he felt he was "being used." Of course, there are many artists who choose to NERVE | 32

avenge their exes by writing chart hits, take Taylor Swift and Adele for example. However, in the music video he is just a boy with a guitar sharing his story with an ever growing army of followers. By harnessing the power of YouTube, Watson began uploading covers of songs by famous artists such as Bombay Bicycle Club and Bon Iver. He explains how he saw performing these covers as a "double sided sword" - "it was really nice to take a song that I was a massive fan of and be able to make my own version of it but it was very scary because I didn’t

want fans to think ‘why is he covering this song?’" With four EP’s, nearly five million YouTube hits and a deal with music giants Warner Bros. Records under his belt, Watson is rapidly becoming the ‘one to watch’ amongst the new generation of self-promoted alternative musicians. This includes artists such as Gabrielle Aplin, who he has known for over two years and refers to as ‘Gabby’. "She was the reason why I started uploading covers on YouTube." Their first duet is a cover of the song ‘Droplets’, originally 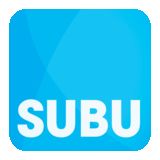 New year, new you? We're here to help you through that dreaded exam period with some ideas of New Year's resolutions you've probably been pu...

New year, new you? We're here to help you through that dreaded exam period with some ideas of New Year's resolutions you've probably been pu...