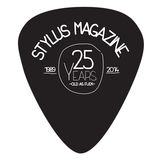 Stylus is Canada's second oldest independent music magazine that has been published bi-monthly by the University of Winnipeg Students’ Association since 1989. Stylus serves as the program guide to CKUW 95.9FM and reflects the many musical communities within Winnipeg and beyond. Stylus strives to provide coverage of music that is not normally written about in the mainstream media. Stylus acts as a vehicle for the work of new writers, photographers and artists, including members of the University of Winnipeg, of CKUW and of the Winnipeg community at large.