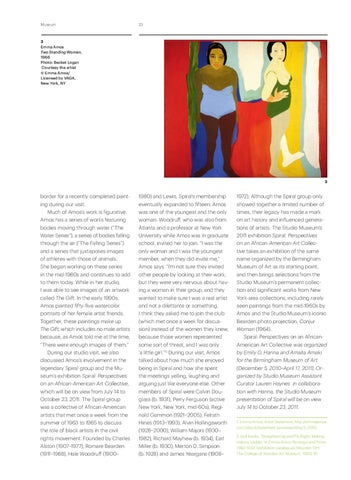 border for a recently completed painting during our visit. Much of Amos’s work is figurative. Amos has a series of works featuring bodies moving through water (“The Water Series”), a series of bodies falling through the air (“The Falling Series”) and a series that juxtaposes images of athletes with those of animals. She began working on these series in the mid-1980s and continues to add to them today. While in her studio, I was able to see images of an artwork called The Gift. In the early 1990s, Amos painted fifty-five watercolor portraits of her female artist friends. Together, these paintings make up The Gift, which includes no male artists because, as Amos told me at the time, “There were enough images of them.” During our studio visit, we also discussed Amos’s involvement in the legendary Spiral group and the Museum’s exhibition Spiral: Perspectives on an African-American Art Collective, which will be on view from July 14 to October 23, 2011. The Spiral group was a collective of African-American artists that met once a week from the summer of 1963 to 1965 to discuss the role of black artists in the civil rights movement. Founded by Charles Alston (1907–1977), Romare Bearden (1911–1988), Hale Woodruff (1900–

1980) and Lewis, Spiral’s membership eventually expanded to fifteen. Amos was one of the youngest and the only woman. Woodruff, who was also from Atlanta and a professor at New York University while Amos was in graduate school, invited her to join. “I was the only woman and I was the youngest member, when they did invite me,” Amos says. “I’m not sure they invited other people by looking at their work, but they were very nervous about having a woman in their group, and they wanted to make sure I was a real artist and not a dilettante or something. I think they asked me to join the club (which met once a week for discussion) instead of the women they knew, because those women represented some sort of threat, and I was only ‘a little girl.’”2 During our visit, Amos talked about how much she enjoyed being in Spiral and how she spent the meetings yelling, laughing and arguing just like everyone else. Other members of Spiral were Calvin Douglass (b. 1931), Perry Ferguson (active New York, New York, mid-60s), Reginald Gammon (1921–2005), Felrath Hines (1913–1993), Alvin Hollingsworth (1928–2000), William Majors (1930– 1982), Richard Mayhew (b. 1934), Earl Miller (b. 1930), Merton D. Simpson (b. 1928) and James Yeargans (1908–

1972). Although the Spiral group only showed together a limited number of times, their legacy has made a mark on art history and influenced generations of artists. The Studio Museum’s 2011 exhibition Spiral: Perspectives on an African-American Art Collective takes an exhibition of the same name organized by the Birmingham Museum of Art as its starting point, and then brings selections from the Studio Museum’s permanent collection and significant works from New York-area collections, including rarely seen paintings from the mid-1960s by Amos and the Studio Museum’s iconic Bearden photo projection, Conjur Woman (1964). Spiral: Perspectives on an AfricanAmerican Art Collective was organized by Emily G. Hanna and Amalia Amaki for the Birmingham Museum of Art (December 5, 2010–April 17, 2011). Organized by Studio Museum Assistant Curator Lauren Haynes in collaboration with Hanna, the Studio Museum presentation of Spiral will be on view July 14 to October 23, 2011. 1. Emma Amos, Artist Statement, http://emmaamos. com/about/statement (accessed May 5, 2011). 2. bell hooks, “Straighten Up and Fly Right: Making History Visible,” in Emma Amos Paintings and Prints 1982–1992, (exhibition catalogue) (Wooster, OH: The College of Wooster Art Museum, 1993), 19.

Studio is the Studio Museum in Harlem's magazine, published twice a year and distributed free of charge to museum members and visitors. In addition to featuring the Museum's exceptional exhibitions and programming, Studio provides readers with a curated glimpse of the best of art and culture across the globe. 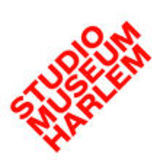 The Studio Museum in Harlem