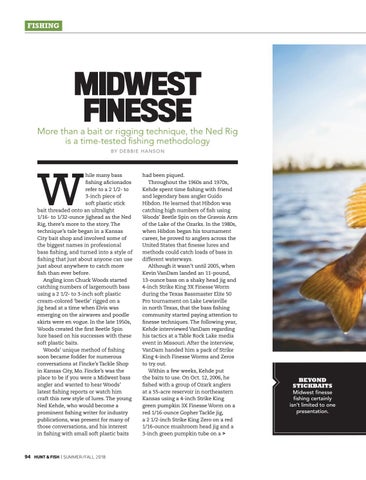 More than a bait or rigging technique, the Ned Rig is a time-tested fishing methodology BY DEBBIE HANSON

had been piqued. Throughout the 1960s and 1970s, Kehde spent time fishing with friend and legendary bass angler Guido Hibdon. He learned that Hibdon was catching high numbers of fish using Woods’ Beetle Spin on the Gravois Arm of the Lake of the Ozarks. In the 1980s, when Hibdon began his tournament career, he proved to anglers across the United States that finesse lures and methods could catch loads of bass in different waterways. Although it wasn’t until 2005, when Kevin VanDam landed an 11-pound, 13-ounce bass on a shaky head jig and 4-inch Strike King 3X Finesse Worm during the Texas Bassmaster Elite 50 Pro tournament on Lake Lewisville in north Texas, that the bass fishing community started paying attention to finesse techniques. The following year, Kehde interviewed VanDam regarding his tactics at a Table Rock Lake media event in Missouri. After the interview, VanDam handed him a pack of Strike King 4-inch Finesse Worms and Zeros to try out. Within a few weeks, Kehde put the baits to use. On Oct. 12, 2006, he fished with a group of Ozark anglers at a 55-acre reservoir in northeastern Kansas using a 4-inch Strike King green pumpkin 3X Finesse Worm on a red 1/16-ounce Gopher Tackle jig, a 2 1/2-inch Strike King Zero on a red 1/16-ounce mushroom head jig and a 3-inch green pumpkin tube on a >

hile many bass fishing aficionados refer to a 2 1/2- to 3-inch piece of soft plastic stick bait threaded onto an ultralight 1/16- to 1/32-ounce jighead as the Ned Rig, there’s more to the story. The technique’s tale began in a Kansas City bait shop and involved some of the biggest names in professional bass fishing, and turned into a style of fishing that just about anyone can use just about anywhere to catch more fish than ever before. Angling icon Chuck Woods started catching numbers of largemouth bass using a 2 1/2- to 3-inch soft plastic cream-colored ‘beetle’ rigged on a jig head at a time when Elvis was emerging on the airwaves and poodle skirts were en vogue. In the late 1950s, Woods created the first Beetle Spin lure based on his successes with these soft plastic baits. Woods’ unique method of fishing soon became fodder for numerous conversations at Fincke’s Tackle Shop in Kansas City, Mo. Fincke’s was the place to be if you were a Midwest bass angler and wanted to hear Woods’ latest fishing reports or watch him craft this new style of lures. The young Ned Kehde, who would become a prominent fishing writer for industry publications, was present for many of those conversations, and his interest in fishing with small soft plastic baits