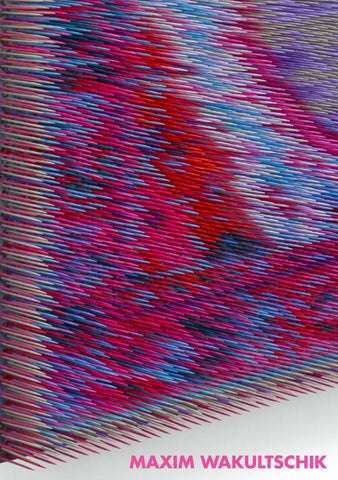 MAXIM WAKULTSCHIK One Thousand and One

The Power of Illusion Maxim Wakultschik has updated his optical portraits for the digital age. Comprised entirely of hand-painted wooden dowels, ‘Optical Portrait Wood’ effectively pixelates a series of portraits into abstraction. With each new point of view, these works respond in kind by offering an entirely new formation of kaleidoscopic geometric forms, creating the illusion of autonomous kinetic energy. Wakultschik actively fragments the human face and challenges viewers to think about how the interplay of color, space, and form create a whole image. Furthermore, through a manipulation of these formal elements and the subsequent distortion of the familiar, Wakultschik offers a new way of seeing, and perhaps, an alternative reality. In his most recent solo exhibition, One Thousand and One, Wakultschik continues his exploration of fragmentation, composition, and pattern by expanding his practice beyond portraiture in his new Persian rug-inspired series, ‘Carpets.’ In this series, the wooden-dowels which the works are composed of take on new meaning. The meticulous hand placement of each dowel to create a whole image is reminiscent of the process of carpet-making, which in itself is a meditation on the collaboration of parts to form a whole. Sitting side-by-side in One Thousand and One, the works of  ‘Optical Portrait Wood’ and ‘Carpets’ center on the principle of deconstruction – a fascination which began with Wakultschik’s first series, ‘Reflections,’ which debuted during his time at Düsseldorf Art Academy in Germany. Wakultschik’s newest works challenge preconceived notions of painting in an analogous manner to his previous illusionistic Neo-Pop portraits. While painting has been used to trick the eye for centuries using painterly methods like chiaroscuro and trompe l’oeil, Wakultschik solidifies his signature hybrid method of sculpture-painting with his new wooden dowel compositions which prompts a reconsideration of the way we think about the medium and its relationship to illusion. Wakultschik uses his illusory works to carefully control not only what viewers see, but how they see it. He uses his art as a medium through which to control and alter the viewer’s perspective. Wakultschik’s engineering of space and color in ‘Reflections’ urges viewers to register the works as three-dimensional, while in ‘Multipersonality,’ the substitution of a flat picture plane for a wooden accordion forces viewers to move around the piece to reveal the full work. Similarly, in his new series, ‘Optical Portrait Wood’ and ‘Carpets,’ the full image can only be seen from a distance, compelling viewers to position themselves accordingly. Therefore, Wakultschik manipulates not only the paintings’ formal elements to orchestrate his optical illusions, but viewers themselves.

In One Thousand and One, the two series enter into a dialogue with one another by comparing and contrasting their formal elements and materiality with their individualism and autonomy. The ‘Carpets’ series, notable for its emphasis on compositional symmetry and geometric pattern, most obviously foregrounds Wakultschik’s technique by drawing comparisons to tradition carpet-making methods. However, the works’ titles (Arash, Anahita, and Azar), inspired by ancient Persian names, infuse the carpets with individual personalities akin to those of the neighboring portraits. Similarly, the featured works from ‘Optical Portrait Wood’ effuse a sense of personhood due to their high level of detail and expressive rendering. The artist bridges the gap to ‘Carpets’ with one optical portrait in particular in which he alters his method by turning the wooden dowels flat to resemble wefts on the reverse side of a tapestry. This drifting in and out of focus between the material and ethereal is at the core of all of Wakultschik’s works. While the portraits of celebrities are recognizable from afar, each individual becomes reduced to a series of wooden dowels upon closer inspection. Through a manipulation of color, space, and material, Wakultschik’s series ‘Optical Portrait Wood’ and ‘Carpets’ expand upon his earlier practice and provide a new perspective with which to reflect upon the power of illusion.

Right On Point — Portraits and Patterns Maxim Wakultschik’s Dazzling Relief Works Kaliande. Valeria. Selena. Beauties in the spirit of Pointillism. Iridescent, multidimensional, recognizable, with graceful features that are almost realistic. Their names, taken from mythology or picked right from the night sky, are full of transcendent connotations that evoke ideas and emotions. The wall objects from Maxim Wakultschik’s series Optical Portraits are mysterious, yet strangely familiar.

Born in Belarus, Wakultschik does not think of himself as a painter. Even though color is a central aspect of his art, his focus is always the object. “As I am an object artist, I find inspiration in everything around me, even if it is a flat object. In my mind, I develop it into something three-dimensional”. While traveling to California, he thus developed the idea of painting with wooden sticks.

Wakultschik alters and reinterprets images that he comes upon or creates himself. Devoted to portraiture that is rooted in the aesthetic traditions of Renaissance Italy, he, at the same time, takes artistic techniques originally developed by artists Georges Seurat or Paul Signac in 19th century France to the next level.

Seriality lies at the core of Wakultschik’s work. He has been working on Optical Portraits since 2015. This year, he presents his new series, Carpets, which is sparked by his interest in tapestries. Open to all kinds of inspiration, he references materiality and symbolic meaning of wall hangings and floor coverings, while at the same time relieving his Carpets from the burden of use. Work titles such as Arash, Azar and Anahita conjure memories of One Thousand and One Nights and imbue the work series with the magic of Scheherazade. Tales of Aladdin, of flying carpets, of palaces and mysteries of the orient shimmer through the pieces. In Qatar, a craving for pomegranates and the longing for the Rivers of Paradise are woven into the pattern.

His artworks are both haptic objects and sensory play of deception. Three-dimensional Pointillism — a continuous invitation to a sensual, visual skimming of the surface. With every changing angle of incidence, every alteration in position, the viewer experiences stunningly diverse perspectives. Wakultschik’s works are never static, but elementally vigorous, leading a life of their own. In a strict geometrical manner of accurately placed, latticed wooden sticks, the compositions summon the female models en face; the color of the wood answering to the polychrome demands of skin, eyes, and hair. Additive application of paint assisted the pointillists in bringing luminous paintings into being. Intransigently assembled and arranged wooden dowels, about three inches in length, serve the same purpose for Wakultschik. The use of tens of thousands of them, adds a wow factor to his art. Pointillism, the once derogatorily coined ‘confetti art’ of the Post-Impressionists, pointed to the pixel and raster graphics of the digital age; an age, in which the boundaries of object and image are fluid to the extreme; where multidimensionality and the deceiving powers of images in an era of ubiquitous availability and virtual repetition are constantly being renegotiated. Stemming from intensive digital preliminary work, Wakultschik uses strict vertical and horizontal configurations to create his special variant of analog portraits. This enables him to create his Optical Portraits, with their captivating picture puzzle character that has become his trademark style. Herein, the object artist recalls his early interest in structure, mathematics, and arrangement systems that have captivated his imagination. “In school, I was the best at Math.” While studying under professor Jannis Kounellis at the Art Academy in Düsseldorf, Wakultschik worked part-time with an antiques conservator. Here, he discovered his passion for plastic expression, in particular for reliefs. His first ventures into this new artistic realm took place 20 years ago and resulted in his Order Reliefs. Up to this day, Wooden Reliefs play a vital role in his oeuvre.

But Wakultschik adds irony to the objects of his observation, while at the same time thwarting their substantiality by way of his technique — the classic Oriental rugs are made of heavy textile and charged with symbolic meaning. Object-like quality and structure of wooden sticks paraphrase their knotting, while simultaneously ruling out the use as floor covering. Wakultschik thus alludes to the quintessential purpose of the objects that served as models — in the East, the product category of rugs includes textiles which cover walls or tables. While a knot count of over a million makes for an exquisite example, Wakultschik needs 16,000 wooden sticks for one of his mid-sized works. Only then does he achieve the desired resolution and the intensity of emotion, illusion, and vibration that he aims for — and his utmost joy of puzzling the viewers and playing with their perception. Op-Art artists such as Bridget Riley admired Seurat.  Wakultschik, in turn, stands in the tradition of Op-Art. Through his empirical studies, he arrives at its pointillistic roots. But with his moving, shimmering dots in a manner of Seurat, he takes the pointillistic technique of painting to a new level and quite literally into space. Painting with light and shadow, and with illusionistic strategies that are as subtle as they are clever, he plays the loveliest tricks on us. Wakultschik puts the viewers’ sense of sight to the test and undermines parameters of perception that hitherto were irrefutable. Diving into optic phenomenons that Goethe was already fascinated with, he pulls his viewers into a world of flickering surfaces; a place where optical deception is embraced. From the depth of the shadowy spaces to the outermost tips of his pointy structures, Wakultschik directs and redirects our sight a hundred thousand. Right on point, indeed. Dorothee Baer-Bogenschütz, Art Critic and Art Historian, Wiesbaden, Germany Translation: Nathalie Krall, Art Historian and PhD Candidate, University of Cologne, Germany

Maxim Wakultschik - One Thousand and One (2018)

Catalogue accompanying Maxim Wakultschik's solo exhibition "One Thousand and One" at Anya Tish Gallery in Houston, Texas, USA, from 7 September 2018 to 6 October 2018. 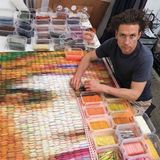