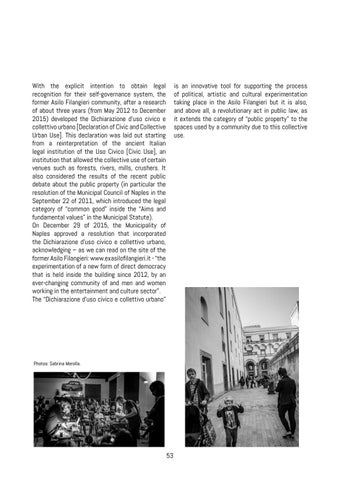 With the explicit intention to obtain legal recognition for their self-governance system, the former Asilo Filangieri community, after a research of about three years (from May 2012 to December 2015) developed the Dichiarazione d’uso civico e collettivo urbano [Declaration of Civic and Collective Urban Use]. This declaration was laid out starting from a reinterpretation of the ancient Italian legal institution of the Uso Civico [Civic Use], an institution that allowed the collective use of certain venues such as forests, rivers, mills, crushers. It also considered the results of the recent public debate about the public property (in particular the resolution of the Municipal Council of Naples in the September 22 of 2011, which introduced the legal category of “common good” inside the “Aims and fundamental values” in the Municipal Statute). On December 29 of 2015, the Municipality of Naples approved a resolution that incorporated the Dichiarazione d’uso civico e collettivo urbano, acknowledging – as we can read on the site of the former Asilo Filangieri: www.exasilofilangieri.it - “the experimentation of a new form of direct democracy that is held inside the building since 2012, by an ever-changing community of and men and women working in the entertainment and culture sector”. The “Dichiarazione d’uso civico e collettivo urbano”

is an innovative tool for supporting the process of political, artistic and cultural experimentation taking place in the Asilo Filangieri but it is also, and above all, a revolutionary act in public law, as it extends the category of “public property” to the spaces used by a community due to this collective use. 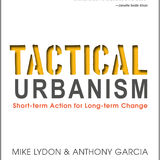 The fifth in our international series of Tactical Urbanism publications. This volume was led by TaMaLaCà in collaboration with The Street Pl...

The fifth in our international series of Tactical Urbanism publications. This volume was led by TaMaLaCà in collaboration with The Street Pl...