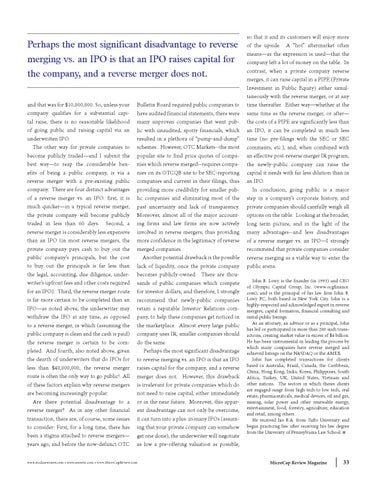 Bulletin Board required public companies to have audited financial statements, there were many unproven companies that went public with unaudited, spotty financials, which resulted in a plethora of “pump-and-dump” schemes. However, OTC Markets--the most popular site to find price quotes of companies which reverse merged--requires companies on its OTCQB site to be SEC-reporting companies and current in their filings, thus providing more credibility for smaller public companies and eliminating most of the past uncertainty and lack of transparency. Moreover, almost all of the major accounting firms and law firms are now actively involved in reverse mergers, thus providing more confidence in the legitimacy of reverse merged companies. Another potential drawback is the possible lack of liquidity, once the private company becomes publicly-owned. There are thousands of public companies which compete for investor dollars; and therefore, I strongly recommend that newly-public companies retain a reputable Investor Relations company, to help these companies get noticed in the marketplace. Almost every large public company uses IR; smaller companies should do the same. Perhaps the most significant disadvantage to reverse merging vs. an IPO is that an IPO raises capital for the company, and a reverse merger does not. However, this drawback is irrelevant for private companies which do not need to raise capital, either immediately or in the near future. Moreover, this apparent disadvantage can not only be overcome, it can turn into a plus: in many IPOs (assuming that your private company can somehow get one done), the underwriter will negotiate as low a pre-offering valuation as possible,

so that it and its customers will enjoy more of the upside. A “hot” aftermarket often means—as the expression is used—that the company left a lot of money on the table. In contrast, when a private company reverse merges, it can raise capital in a PIPE (Private Investment in Public Equity) either simultaneously with the reverse merger, or at any time thereafter. Either way—whether at the same time as the reverse merger, or after— the costs of a PIPE are significantly less than an IPO, it can be completed in much less time (no pre-filings with the SEC or SEC comments, etc.), and, when combined with an effective post-reverse merger IR program, the newly-public company can raise the capital it needs with far less dilution than in an IPO. In conclusion, going public is a major step in a company’s corporate history, and private companies should carefully weigh all options on the table. Looking at the broader, long term picture, and in the light of the many advantages--and less disadvantages of a reverse merger vs. an IPO—I strongly recommend that private companies consider reverse merging as a viable way to enter the public arena. John B. Lowy is the founder (in 1993) and CEO of Olympic Capital Group, Inc. (www.ocgfinance. com), and is the principal of his law firm John B. Lowy PC, both based in New York City. John is a highly-respected and acknowledged expert in reverse mergers, capital formation, financial consulting and initial public listings. As an attorney, an advisor or as a principal, John has led or participated in more than 200 such transactions, creating market value in excess of $4 billion. He has been instrumental in leading the process by which many companies have reverse merged and achieved listings on the NASDAQ or the AMEX. John has completed transactions for clients based in Australia, Brazil, Canada, the Caribbean, China, Hong Kong, India, Korea, Philippines, South Africa, Turkey, UK, United States, Vietnam and other nations. The sectors in which theses clients are engaged range from high tech to low tech, real estate, pharmaceuticals, medical devices, oil and gas, mining, solar power and other renewable energy, entertainment, food, forestry, agriculture, education and retail, among others. He received his B.A. from Tufts University and began practicing law after receiving his law degree from the University of Pennsylvania Law School. n 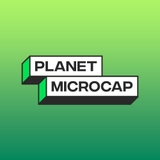