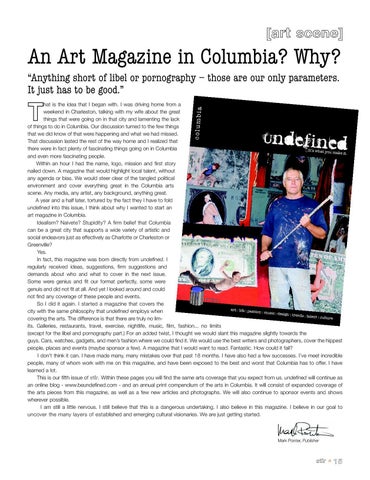 An Art Magazine in Columbia? Why? “Anything short of libel or pornography – those are our only parameters. It just has to be good.” hat is the idea that I began with. I was driving home from a weekend in Charleston, talking with my wife about the great things that were going on in that city and lamenting the lack of things to do in Columbia. Our discussion turned to the few things that we did know of that were happening and what we had missed. That discussion lasted the rest of the way home and I realized that there were in fact plenty of fascinating things going on in Columbia and even more fascinating people. Within an hour I had the name, logo, mission and first story nailed down. A magazine that would highlight local talent, without any agenda or bias. We would steer clear of the tangled political environment and cover everything great in the Columbia arts scene. Any media, any artist, any background, anything great. A year and a half later, tortured by the fact they I have to fold undefined into this issue, I think about why I wanted to start an art magazine in Columbia. Idealism? Naivete? Stupidity? A firm belief that Columbia can be a great city that supports a wide variety of artistic and social endeavors just as effectively as Charlotte or Charleston or Greenville? Yes. In fact, this magazine was born directly from undefined. I regularly received ideas, suggestions, firm suggestions and demands about who and what to cover in the next issue. Some were genius and fit our format perfectly, some were genuis and did not fit at all. And yet I looked around and could not find any coverage of these people and events. So I did it again. I started a magazine that covers the city with the same philosophy that undefined employs when covering the arts. The difference is that there are truly no limits. Galleries, restaurants, travel, exercise, nightlife, music, film, fashion... no limits (except for the libel and pornography part.) For an added twist, I thought we would slant this magazine slightly towards the guys. Cars, watches, gadgets, and men’s fashion where we could find it. We would use the best writers and photographers, cover the hippest people, places and events (maybe sponsor a few). A magazine that I would want to read. Fantastic. How could it fail? I don’t think it can. I have made many, many mistakes over that past 18 months. I have also had a few successes. I’ve meet incredible people, many of whom work with me on this magazine, and have been exposed to the best and worst that Columbia has to offer. I have learned a lot. This is our fifth issue of stir. Within these pages you will find the same arts coverage that you expect from us. undefined will continue as an online blog - www.beundefined.com - and an annual print compendium of the arts in Columbia. It will consist of expanded coverage of the arts pieces from this magazine, as well as a few new articles and photographs. We will also continue to sponsor events and shows wherever possible. I am still a little nervous. I still believe that this is a dangerous undertaking. I also believe in this magazine. I believe in our goal to uncover the many layers of established and emerging cultural visionaries. We are just getting started. 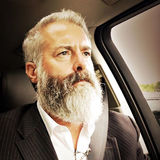