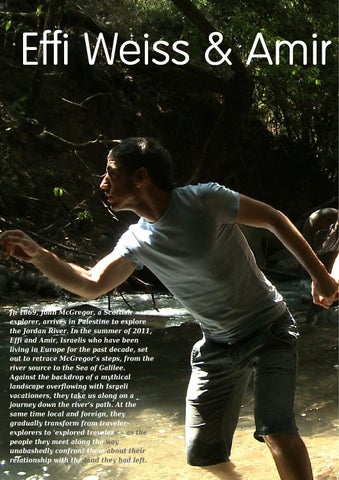 In 1869, John McGregor, a Scottish explorer, arrives in Palestine to explore the Jordan River. In the summer of 2011, Effi and Amir, Israelis who have been living in Europe for the past decade, set out to retrace McGregorâ&#x20AC;&#x2122;s steps, from the river source to the Sea of Galilee. Against the backdrop of a mythical landscape overflowing with Israeli vacationers, they take us along on a journey down the riverâ&#x20AC;&#x2122;s path. At the same time local and foreign, they gradually transform from travelerexplorers to 'explored travelers' - as the people they meet along the way unabashedly confront them about their relationship with the land they had left.