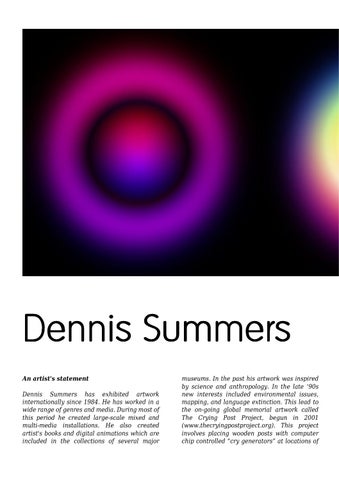 Dennis Summers An artist&#39;s statement Dennis Summers has exhibited artwork internationally since 1984. He has worked in a wide range of genres and media. During most of this period he created large-scale mixed and multi-media installations. He also created artist&#39;s books and digital animations which are included in the collections of several major

museums. In the past his artwork was inspired by science and anthropology. In the late ‘90s new interests included environmental issues, mapping, and language extinction. This lead to the on-going global memorial artwork called The Crying Post Project, begun in 2001 (www.thecryingpostproject.org). This project involves placing wooden posts with computer chip controlled “cry generators” at locations of